A Day in Flashy Florence

Florence, Italy is saturated with treasures, from statues to paintings to culinary masterpieces. But the city itself is its most exquisite work of art. The architecture rivals the people for flash. A factor of unforgettability flows right along with the city's river. And the best part is, from morning, to noon to night, you can experience the best of Renaissance Italy just by strolling the streets of flashy Firenze.

The Duomo and it's sparkling red, green and white facade absorbs the morning light like a marble sponge. With a crisp morning sky, the entire impressive structure instantly becomes more photogenic than supermodels strutting the catwalks of Milan. A short walk away and the Ponte Vecchio shimmers like the jewelry being sold in its shops. The Old Bridge is like no other bridge you've ever seen, bustling with shoppers scouring the stores hanging out over the water like flower-filled windowboxes.

If you're lucky, you're stomach will let you know it's lunchtime before the bell towers around town. In Florence, as in a lot of Italy, most anywhere will provide a good bite, but a stop at Trattoria Mario's or All' Antico Vinaio and you've arrived at another plane of gastronomic excellence. Most obviously, you're getting something fresh for lunch: fresh-sliced proscuitto or porchetta piled high on fresh-baked bread, or perhaps a bowl of freshly-made pasta next to a plate of freshly picked vegetables.

After a carbo-loading lunch, walking may be the best remedy for a full stomach. Of course, if a scooter is at your disposal, it may be one way to motor across town to some of the other tourist destinations like the Uffizi Gallery or the Academia, where Michaelangelo's David calls home. But if you choose to tackle the Italian roadways, you're risking more than just your personal safety.

As the afternoon begins to wane, Firenze is just getting revved up. The trattorias, cafes and bars begin to buzz with life, as well as the open piazzas. Street musicians playing cellos, violins and guitars warm up, quickly shifting into classical masterpieces, Italian songs and a few familiar pop hits. You've never heard Gloria Gaynor's "I Will Survive" until you've heard it plucked on a cello by an old Italian man standing next to a carousel.

Before the Tuscan sun begins to drop behind the far-off hills, circle back to the Duomo. By now, you've hopefully burned off your lunch, or else the 400+ staircase to the top of the cupola might be sluggish. The reward at the top is well worth it. A 360 degree view of this stunning Renaissance city is emphasized by the burnt-orange halo descending over every terra-cotta roof and marble column. The city glows as you take a deep breath and exhale into the brisk wind whipping up the side of the dome.

By the time you make your way back to ground level, and night has fallen over Firenze, a new beauty awakens. Again revisiting an earlier landmark, walk past Ponte Vecchio to one of the other bridges crossing Florence's river. From the middle of any bridge, the river reflects the city lights and an artistic dance of shadow and illumination unravels in the flowing Arno.

Florence - from its buildings to its food to its people - is a photography playground. There are treasures around every corner, and since you can't take snapshots in the art museums, you'll be snapping away along the streets. But the naked eye is just as good, since most anything you see will be indelibly saved in your memory - the unforgettable flash of Firenze.

Here are some photos from a day in Florence - morning, noon and night. 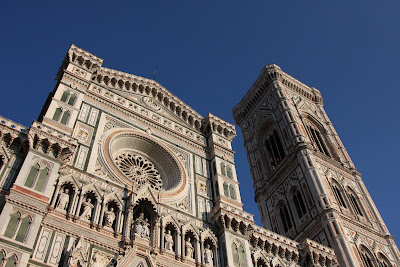 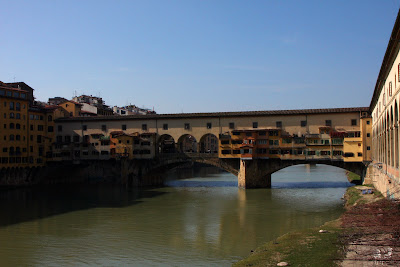 Ponte Vecchio in the sun 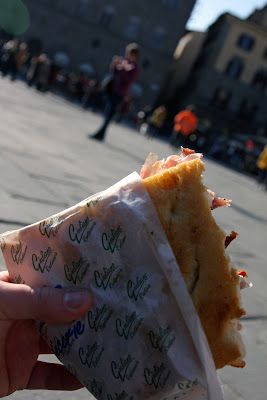 Proscuitto panini from All' Antico Vinaio 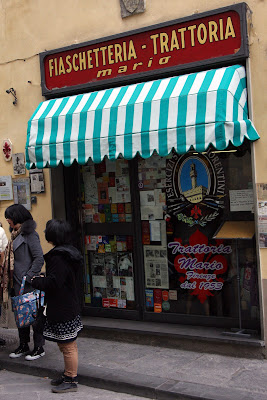 The unassuming front of Trattoria Mario 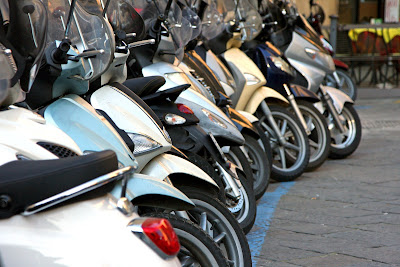 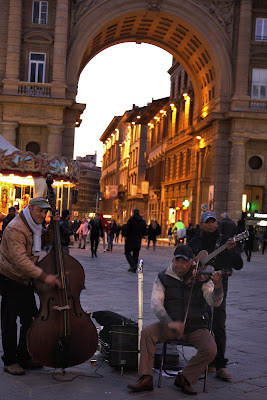 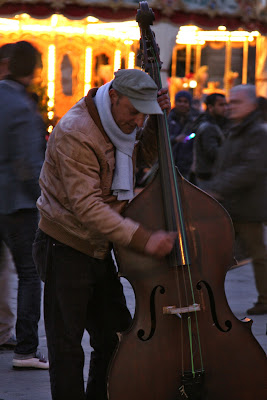 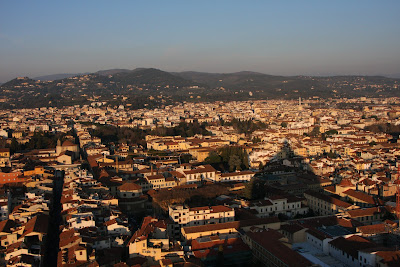 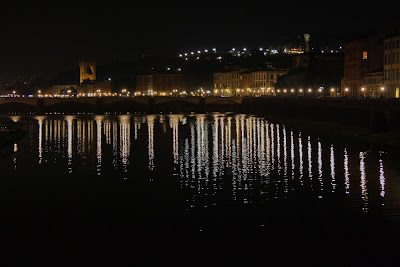 Shimmering lights on the Arno 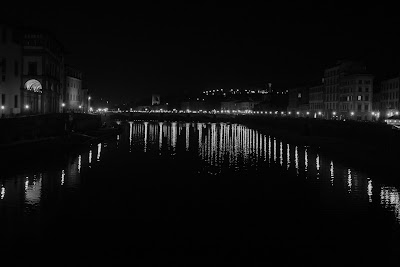 Arno in Black and White 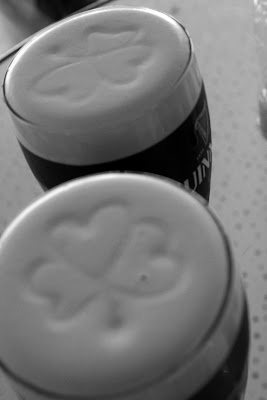 By Michael Hartigan
Printed in the Saugus Advertiser - March 14, 2013

Dublin locals can’t stand it when you stereotype them. They know the world expects them to be overly hospitable, highly talkative connoisseurs of fine spirits. It’s not that they take offense; they just humbly prefer you refrain from pointing out their best qualities and instead join them for a pint.

It doesn’t take much to feel at home in Dublin, Ireland. The people here welcome all comers with open arms, hearty laughs and heartier conversation, broken only by the occasional request for a, “wee pint of Guinness.” Step into any pub and suddenly you’re one of them, feeling right at home embracing the Irish way.

Just pick a pub, any pub, because any pub in Dublin is better than every bar anywhere else. You won’t go wrong with any one you choose. Or, if you’re like me and have a Sunday to spare in the Irish capital, any seven you choose.

My Sunday in Dublin began quietly enough, meeting some friends for coffee and strolling around the grounds of the magnificent Trinity College. When we saw that the line to see the famed Book of Kells stretched around one courtyard and spilled over into the next, we decided not to waste a day in Dublin standing in a line. There are much better ways to experience Irish culture.

After strolling down a few roads away from the College, we found ourselves at The Duke, a typical Irish pub serving typical food and typical beer. But typical is a compliment here because anything less or anything more would be unauthentic and out of place.

At The Duke I asked the bartender about the rules for the upcoming Irish Football match. Three pints later, I still was unsure about the rules but had begun to understand the importance of that afternoon’s impending semifinal championship match between Dublin and Mayo.
We thanked the bartended and sauntered into the sunny Irish afternoon in search of a pub we’d all heard of named O’Neill’s.

Upon my arrival in Ireland several days before, several people — including a bus driver — forewarned me that the Irish will never say they don’t know how to get somewhere. Instead, the bus driver assured me, an Irishman will give you directions whether he knows the way or not.

After obtaining bad directions from a local, we walked 30 minutes the wrong way before turning around and retracing our steps. O’Neill’s was five minutes from where we had begun.


If you can only visit one Irish pub in Dublin, snag a seat at O’Neill’s. It is on a back corner near an old church and a side street where tour buses pick up day passengers. One of O’Neill’s draws is the building itself. It is a pile of old, wooden rooms scattered on top, next to and around corners and crannies.

On that particular Sunday, the crowd was more locals than tourists due to the Irish Football playoff match. The sport could best be described as a mix between soccer, rugby and felony assault. I was immediately drawn to the astounding athleticism and savage headshots, not to mention the roars emanating equally from the blue-and-white clad Dublin fans and the Mayo supporters in green and red. The atmosphere resembled a Boston bar during a Yankees/Red Sox game. In fact, the bartender described the Dublin team as the Irish Football equivalent of the Bronx Bombers. So of course, we rooted for Mayo.

After several pints and a Mayo win, we spilled out of O’Neill’s cheering for the victors and got caught up in the flow of happy sports fans undulating toward the city’s infamous Temple Bar.

Temple Bar is a neighborhood built for revelry, packed with pubs and restaurants. We picked our way through the decorated and lively Oliver St. John Gogarty’s Pub, named after one of the city’s influential writers and difference-makers, and then turned up at Buskars for a pint.

From there, the only logical destination was the neighborhood’s namesake, the pub called Temple Bar.

If O’Neill’s was a classic pub, Temple Bar was its crazy, drunk uncle. The pub was jammed with people, both locals who watched the game and a deluge of tourists crammed around the musicians rattling off traditional Irish songs.

We found a tiny square of floor one layer removed from the bar and stood our ground. The two older gentlemen sitting on stools in front of us immediately started a conversation about America, Irish Football and the tortoise-like serving speed of our bartender.

A few pints and few sing-alongs later, we left our new friends at Temple Bar, found our way to the nearby Finnegan’s, and made a few more. Nothing elaborate or flashy stands out about Finnegan’s, except the drinks and laughs we shared with the other patrons: a priest, a lawyer, a cop and a firefighter (no, this is not the start of a joke).


The group I had traversed Dublin with began to thin after Finnegan’s, but I was not ready to concede the evening. Us remaining few took the roundabout way home, remembering vaguely that asking for directions would have gotten us the same result. After some rights and lefts and unknown back roads, we stumbled onto The Stag’s Head. We grabbed three seats at the bar and settled in for a few more pints of Guinness.

After several days and what was beginning to be countless pubs, the local brew still tasted fresh. Guinness in Ireland is equivalent to scotch in Scotland or cabernet in Napa. Here, this black liquid ambrosia takes on a whole new body and flavor, rich with malty sweetness and smooth from start to finish.

As I watched the foam slide down inside my empty pint glass, I knew it was time to head for the hotel. A large crowd of locals, some sitting and some standing, was congregated immediately outside the door. They were a raucous bunch, singing, yelling and talking in escalating decibels. I knew they were in their 60s, or at least one of them was, by the writing on a birthday cake that sat partially cut up on an overturned wooden barrel in the middle of the street.

“Happy birthday!” I yelled over the din, and suddenly we were part of the family.
I spent an hour talking to a man named Peter from a town just up the road from Dublin. Peter lived seven years in Somerville, on a street and house that I knew. Small world, indeed.

When we finally, regrettably departed, the pubs were shuttering their windows. I had drank, hugged and chatted my way across greater Dublin, in a fashion some people would consider wasteful or crass. I considered it getting to know the city, the people, the culture, their delicious beer and delicious birthday cakes. And incontrovertible proof to my theory that any pub in Dublin, is better than every bar anywhere else.


Read more: Wherever it Takes column: Any pub in Dublin - Saugus, MA - Saugus Advertiser http://www.wickedlocal.com/saugus/news/x846069013/Wherever-it-Takes-column-Any-pub-in-Dublin#ixzz2NiA332AR
Posted by Mike at 10:04 AM No comments: 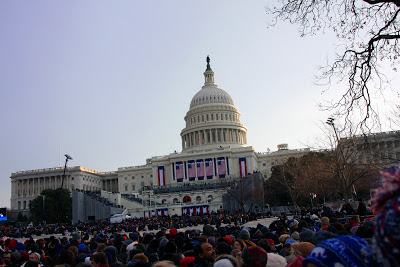 Every city has a history she’s just dying to tell. A good traveler always keeps an ear open. If so, you just might be able to stop listening and lend your own voice to the conversation.
Read the entire article at: http://www.wickedlocal.com/saugus/features/x171153490/Wherever-It-Takes-column-Experiencing-America-s-greatest-tradition?zc_p=0#axzz2MPcA7VRn