Washington, D.C. is booming with historical sights. But the sights that bloom are the most unforgettable.

Every spring the cherry trees scattered around our nation's capital burst into life, sending vibrant shades of pink showering over white marble monuments. They draw massive crowds from all over, who gather around the Washington and Jefferson monuments around mid-April to experience this annual natural wonder.

All senses are pricked by this festival of color. The springtime aromas mix with the buzz and hum of awed tourists. Before Washington's infamous humidity hits later in summer, this time of year typically offers visitors a comfortable springtime atmosphere.

And of course, the sights are a visual feast, especially at dusk. The pools reflect the setting sun, which infuse the pinkish-white blossoms with an amber halo. Even the faux petals draping every store and restaurant signals that the cherry blossom effect is all-reaching.

A visit is worthwhile and the city is well-marked to let you know where the best viewing is. Around the Tidal Basin, where the Jefferson Memorial shimmers in the background, is one of the most awe-inspiring. But near the Capitol and Washington Monument are also worthy stops. And a neighborhood about a half hour away in Bethesda, Maryland hides a treasure-trove of cherry trees without as much human congestion.

Here are some of my favorite photos of the 2013 cherry blossoms. 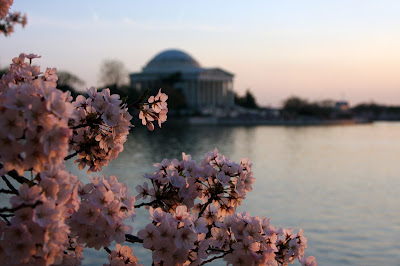 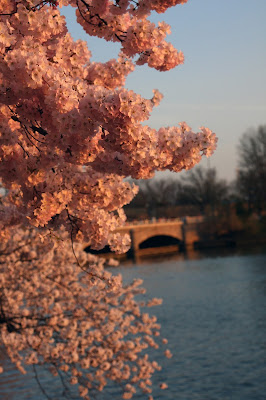 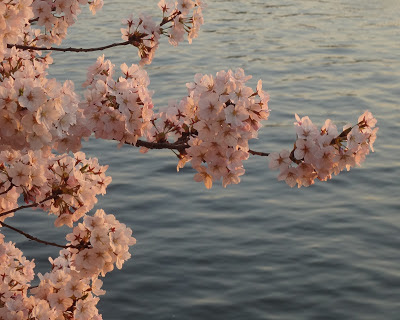 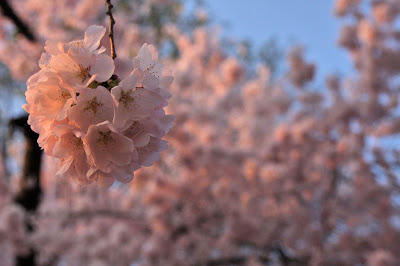 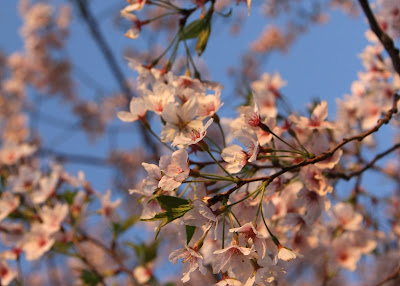 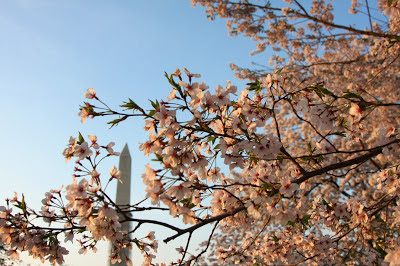 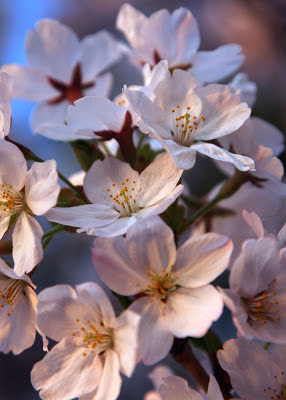 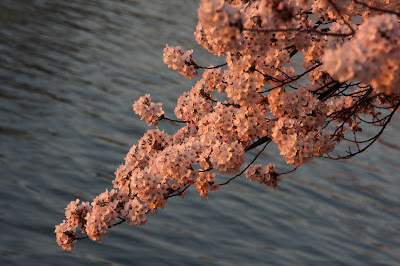 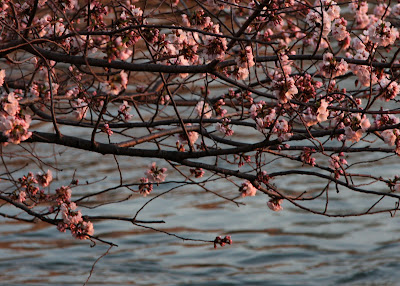 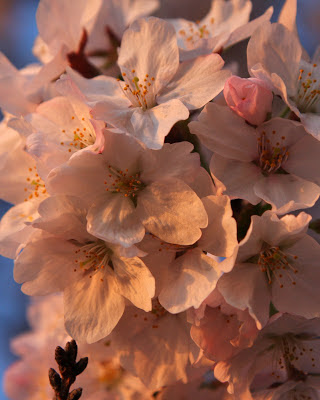 Wherever it Takes column: Danke, Papa

The following article was published in the Wicked Local weekly newspapers on June 27, 2013. 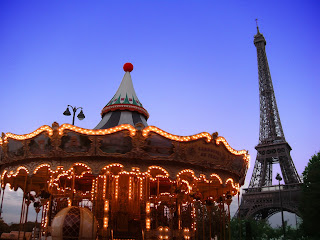 James “Gigi” DeSimone earned his travel chops the hard way: dodging shrapnel and Nazis. He participated in the European theater during World War II and as a field medic on D-Day, saw nightmares of the unforgettable kind.

But my grandfather saw some other things in Europe that he wanted to remember. Those he found by exploring the countries he was defending, when he was able. He sought out good experiences, thinking that all he knew of European life - days filled with explosions and gore, nights dripping with anxiety - couldn’t be the finality of existence across the Atlantic.

Perhaps to protect his grandchildren or maybe to keep the unforgettable somewhat forgotten, he doesn’t talk about wartime much. Instead, he recounts the adventures that took him around France and Belgium, riding on trucks and meeting girls. He even had a girlfriend in Paris, which he liked to point out in front of my grandmother, eliciting a good laugh and eye roll. Michelle Dupont, he would say, may still be waiting for him on, “one of those bridges over that river.”

When Gigi returned from Europe, met my grandmother Alice and started a family, they shared a common love for travel. In their day, Nana and Papa were the most avid of world travelers. Mexico, Ireland, Italy – they took it all in.

Years slipped by and travel went away with the hearing, eyesight and easy mobility. The stories, however, remained colorful and vivid, told with quick wit and sharp recollection.

On the night before my wife and I left for our three-nation European honeymoon, we visited my grandparents hoping to get a few travel tips and maybe a story or two.

They didn’t disappoint. Nana corrected Papa during a story about a salesman on a beach in Mexico who told my grandmother she was too grande to wear the shawls he sold out of his kiosk.

Amidst the laughter, my grandfather stood up and told us to wait a minute. He disappeared into his bedroom and came back holding a small 4-inch by 4-inch brown booklet. He handed it to me.

On the tattered front cover were the words, German Language Guide.

I held it like it was made of crystal, afraid if I opened the cover the whole booklet would disintegrate in my palm.

The inside cover read:

War Department
Washington 25, D.C. 22 June 1943.
TM 30-306, German Language Guide, to be used with the Introductory Series Language Records, is published for military personnel only, and is not to be republished in whole or part without the consent of the War Department. By order of the Secretary of War:
G.C. Marshall,
Chief of Staff.

The booklet had been with my grandfather throughout the war. Like him, it clearly had some wear-and-tear from its time in Europe. I wondered how he used it and rapidly began flipping through it like a kid with a comic book.

On the next page was an Archie comics-esque cartoon depicting four G.I.s seated around a record player, presumably practicing their German language skills. Each one had a confounded look and the small Dachshund dog with them appeared to be howling at their ineptitude. The dog was all over the booklet. I guessed he was the least offensive representative of German culture they could come up with in 1943. The comics ran throughout, each one of U.S. soldiers mocking each other for their poor bilingualism. There’s even a general in a bathtub.

Humor aside, the booklet is filled with (now outdated) maps and a few dozen pages of common German words and phrases. All in all, it appeared to be quite a helpful piece of literature. Something one would actually find very useful in Germany.

“That’s for you,” my grandfather said. “Take it with you.”

I was touched. Clearly this had significant meaning to him, but he wanted me to have it.

“But we aren’t going to Germany,” I said. “We’re doing France, Switzerland and Italy.”

He smiled and I couldn’t help but think he had something wise to impart upon me but withheld it, possibly knowing the merits of making the discovery on my own.
Instead he said, “Well I wish I kept the French one too.”

Two weeks later, at a train station in Bern, Switzerland, I emerged on the platform to signs written solely in German. My wife and I anticipated French and Italian along our journey, not factoring in the third language of the Swiss – but Papa had. Too bad I left the German booklet home. That was the last time I didn’t listen to my grandfather. That was the last time I didn’t take a little bit of him wherever I went.

Papa was the original adventurer in my family. He seized opportunity. He saw whatever he could, experienced whatever he could experience. And despite the horrors of war or hard times, the only memories he shares now are unabashedly joyous and distinctly humorous.

And of all the things he has given me, I cherish this outlook the most - his German booklet is a close second.

At the Smithsonian Air & Space museum in Washington, D.C. there is a World War II exhibit. There, somewhat out of the way of 1940s aircraft, is a display case with era memorabilia. The last time I was there, I noticed a small green booklet that looked vaguely familiar. It was the Japanese Language Guide. Next to it in blue was the French Language Guide. But nowhere in the case was the brown German booklet that I had tucked away safely at home.

I’m sure there are many out there somewhere and maybe someday I’ll offer to give mine to the museum. But for now, it’s not going anywhere except with me the next time I visit Europe. Just in case.

I’ve learned a very important word from it.

Danke. As in, danke Papa.