Creating your own magic at Disney World’s new art festival 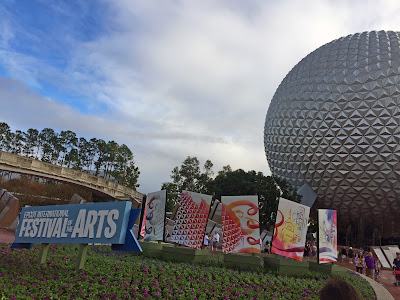 My daughter was posing in front of the Mona Lisa. She had seen so much fascinating art throughout the day, and made it a point to imitate the subject of each piece. Now, she had Mona Lisa’s famous smirk down pat, with one side of her mouth curled up and an eyebrow cocked just so. But her sparkly princess dress made it difficult to fully replicate the purple dragon’s posture.
We clearly weren’t at the Louvre in Paris, even though the Eiffel Tower was just a short walk away. And although we were admiring an original Mona Lisa, it was not a DaVinci – it was a Disney.
That purple posing dragon, that was Figment, Walt Disney World’s cartoon embodiment of the imagination. And his likeness was not just instilled into the Mona Lisa. He was also bellowing on a bridge in Munch’s The Scream and crossing the Delaware with George Washington in Emanuel Leutze’s masterpiece.
Figment has been a fixture around Walt Disney World’s Epcot for years, starring in rides and encouraging kids to create. But this winter, Figment took center stage as Walt Disney World introduced its inaugural International Festival of the Arts, hosted at Epcot from January 13 through February 20, 2017.
The International Festival of the Arts was the newest addition to Epcot’s growing slate of seasonal happenings, and it filled the mid-winter gap in the same way the International Food and Wine Festival highlights the fall and the International Flower and Garden Festival brightens up the spring. With new lands, rides and offerings under construction at other Walt Disney World properties, these types of special events give Epcot an enticing freshness.
The arts festival, though, was unique in that it endeavored to enable as well as entertain, infusing every detail with an inspired dose of the imagination. 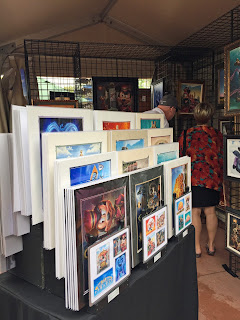 By opening day, vibrantly colored signs, vendor stalls and performing areas had popped up. Each character meet and greet photo spot was now adorned with a specialized painting of the spot’s character. A Figment topiary greeted guests near Spaceship Earth. And scattered around the park were enlarged, life-sized renditions of some of history’s greatest paintings – with a twist. They were layered and open-backed so that guests could enter the frames, pose for a photo and become a part of the art.
The festival brought together an array of creative mediums – from painting and drawing to music and singing to performance and culinary art – to celebrate all art forms and the power of the imagination.
Sidewalk chalk artists – a la Bert from Mary Poppins – scribbled their way around the pavilions’ pavement. Moving statues ringed the Fountain View stage. Booths highlighting artwork from Disney artists encircled the central World Showcase lagoon. A flash painter, with rapid and precise brush strokes, created a Donald Duck portrait within moments in front of a cheering crowd. Acrobats flipped and tumbled in China while School groups sang in the Odyssey pavilion. 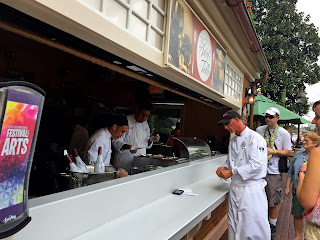 Food vendor stalls were transformed to serve innovative dishes and flamboyant fare. There was a slice of color-blocked almond cake and a deconstructed Reuben sandwich arranged in a ring of puff pastry. Of course, inventive alcoholic beverages abounded as well, from coffees to margaritas.
In the America pavilion’s theater some of Disney’s own Broadway stars held a series of medley shows. We enjoyed Ashley Brown, who played Belle in Disney’s 2005 production of Beauty and the Beast and then the original Mary Poppins in 2006; and Josh Strickland, who starred in the title role of Disney’s Broadway rendition of Tarzan. They performed songs from Frozen, Mary Poppins, The Little Mermaid and others.
Walt Disney World’s daily park shows already employ some extremely talented performers. But to hear professional Broadway stars was an elevated plane of excellence: a rare and mesmerizing treat that captured almost every patron who strolled past the outdoor stage. 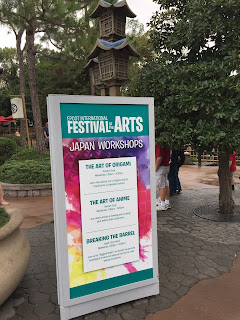 Yes, art was everywhere – but not merely finished products. The theme of the festival revolved more around engaging in the process rather than the framed result. The festival featured an extensive schedule of demonstrations, classes and workshops, as well as interactive experiences for younger guests.
We searched for Figment Mona Lisa and the other Figment-ized paintings as part of Figment’s Brush with the Masters Scavenger Hunt, which encouraged kids to explore each Epcot country and engage with artists who showed off the methods and styles of their homelands. For a nominal fee, we purchased a map and stickers to guide us around the World Showcase and once we found all of Figment’s paintings, we received a souvenir magnet.
The art installations in progress were also fascinating features.
For example, lining one of the walkways was a long, blank canvas about six feet high that curved with the path itself. On opening day, light pencil sketches swooped over the white surface. Later in the day, two artists were furthering the outlines and filling in with bright blue and green paint. I stopped to chat with the painters and learned that they were locals hired to work outside for the duration of the arts festival, painting each day on this expansive backdrop. They showed me a template of what the final, massive painting would be – a beautiful, bright abstract painting of peaks, valleys and wave-like designs, very much in theme with Epcot and its focus on nature and technology.
In museums, we always see the final product behind a frame. But to witness artists at work, and watch the painstaking process of planning, sketching and precision evoked a deeper appreciation. What was to become of the gigantic piece of art? According to the painter, at festival’s end it would be sliced up, mounted and put up for sale.
That wasn’t the only enormous, blank canvas on site, though. Another canvas ran along the main walkway, and it had a different purpose. This second one was a paint-by-number landscape for guests to fill in.
Cast members handed guests small foam brushes and specific cups of paint. Each paint color corresponded to numbers on the canvas. By the end of the day, the mural was still unrecognizable, even though color splotches scattered across the elongated canvas. But a couple days later, the scene had taken form – an abstract, vibrant landscape of Epcot itself, complete with the golf ball Spaceship Earth, a swooping monorail and other noticeable landmarks.
Most every guest takes something home from Walt Disney World, but this was the first time my family and I got to leave something behind (other than the contents of my wallet). It was my family’s favorite festival offering.
With the International Festival of the Arts, Walt Disney World, with some help from its guests, chiseled out a masterpiece – a memorable way to be part of the magic. 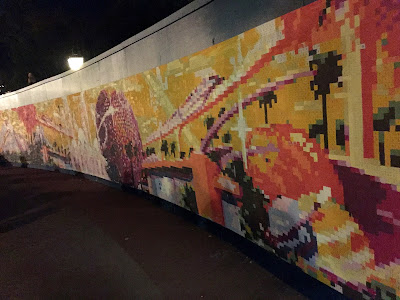