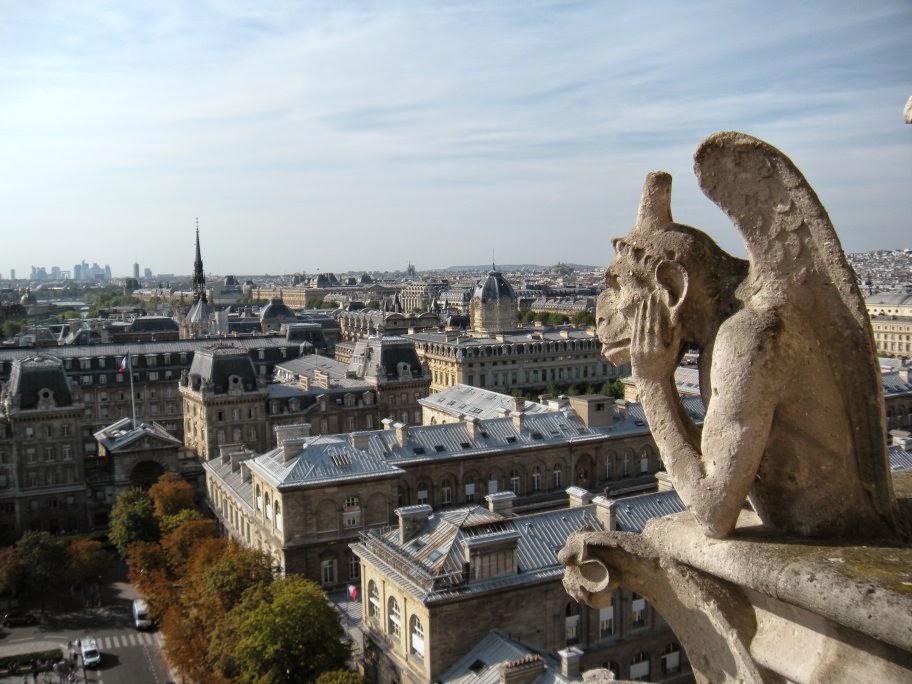 This article appeared in the wicked local weeklies in December, 2014
Dusk atop the Notre Dame bell tower and the river Seine makes her presence known. On the horizon she begins the charge, a silver glimmer ducking around towers and teapot domes, hidden at one curve, brazenly obvious around another.
From this vantage point, the river’s importance is obvious. It has been Paris' greatest soldier and liberating cleanser. It has been a demarcation line between left and right, Bourgeoisie and Bohemian, and a friendly landmark for many a wandering visitor. Its current is near impossible to judge, ebbing and flowing in modern times with tourism barges and Gendarmerie police boats.
In so many ways, the river is the source of the City of Light. All walks of life gather near it, over it, on it and all Parisian monuments sit back at a respectable distance. Its proletariat power is unmatched in the city limits.
And yet the Seine, filled to the banks with history, splits in deference to the island housing Paris’ most enigmatic, manmade creation – the cathedral of Notre Dame.
High atop the majestic cathedral, I stepped to the wall to gaze upon the river and the Eiffel Tower in the distance. All of Paris was spread out before me. At every angle the nooks and notches of this famous place of worship held a mysterious vibe, quirky and gothic all at once. It took me a moment to realize that the bit of macabre whimsy was emanating from the motionless figures perched out over oblivion.
The gargoyle hanging out next to me had a permanent, toothy smirk and I couldn’t help but wonder if he was laughing at how great his view was, or perhaps that the great river Seine had to bow to him and his brethren, a bunch of water-gurgling stone monkeys. I assumed it was probably a bit of both.
There was no denying that Quasimodo and his immobile buddies had themselves a prime piece of Parisian real estate. Atop the bell tower at Notre Dame, there is a jaw-dropping panorama in all directions. No matter which way you look, there exists a place, a person, or an experience that leaves you in awe.
I began to think of the string of unforgettable moments I had during my time in Paris. There were, of course, the landmarks: Eiffel Tower, The Louvre, Arc du Triomph, the list goes on.
There was, of course, the food. To this day, there has been no taste quite like munching on a fresh crepe sucre or crepe Nutella that was made in front of me by a street vendor.
And there was, of course, the history. The old paper musk that filled the Shakespeare & Company bookstore lingered, in a good way. That old bookstore was graced by the likes of Walt Whitman and countless other writers over the years. There’s even a small bed, desk, sink and typewrite upstairs free for any upstart/struggling writer to utilize. Few purchases in my life have given me the same amount of chills as the book I bought there – a copy of Shakespeare’s “Othello & Cymbeline” from the year 1900.
But for my money, nothing in Paris tops Notre Dame.
The previous day, I went into the cathedral and toured its depths while the priest conducted a Mass in French. His voice, echoing through the hollow stone, brought such warmth that he made this massive structure feel intimate. In my gratitude, I lit a prayer candle and became part of the congregation in my own tiny, flickering way.
But it wasn’t until I spent 30 minutes in line to climb 300 stairs that I truly appreciated Notre Dame and by extension, Paris.
At the top, the best moment came when my camera battery ran out. All I could do was enjoy the view through my own eyes – unimpeded by a lens.
Victor Hugo might have wanted us to pity his humble hunchback, but me, I envy him. Not just because of the view, but because he’ll forever be in the pages of Paris. I had to leave the City of Lights six hours later on a high-speed train.
But you won’t hear any complaints out of me. I've heard the squawking paparazzi around the Mona Lisa; I’ve eaten escargot at a street café; I've smelled fresh-baked baguettes; I’ve read a book on the lawn under the Eiffel Tower.
Up on top of the Notre Dame bell tower, I've seen a gargoyle smile at the setting sun. And if it’s good enough for the gargoyles, it’s good enough for me.
Posted by Mike at 12:42 PM No comments:

How the West is Wed 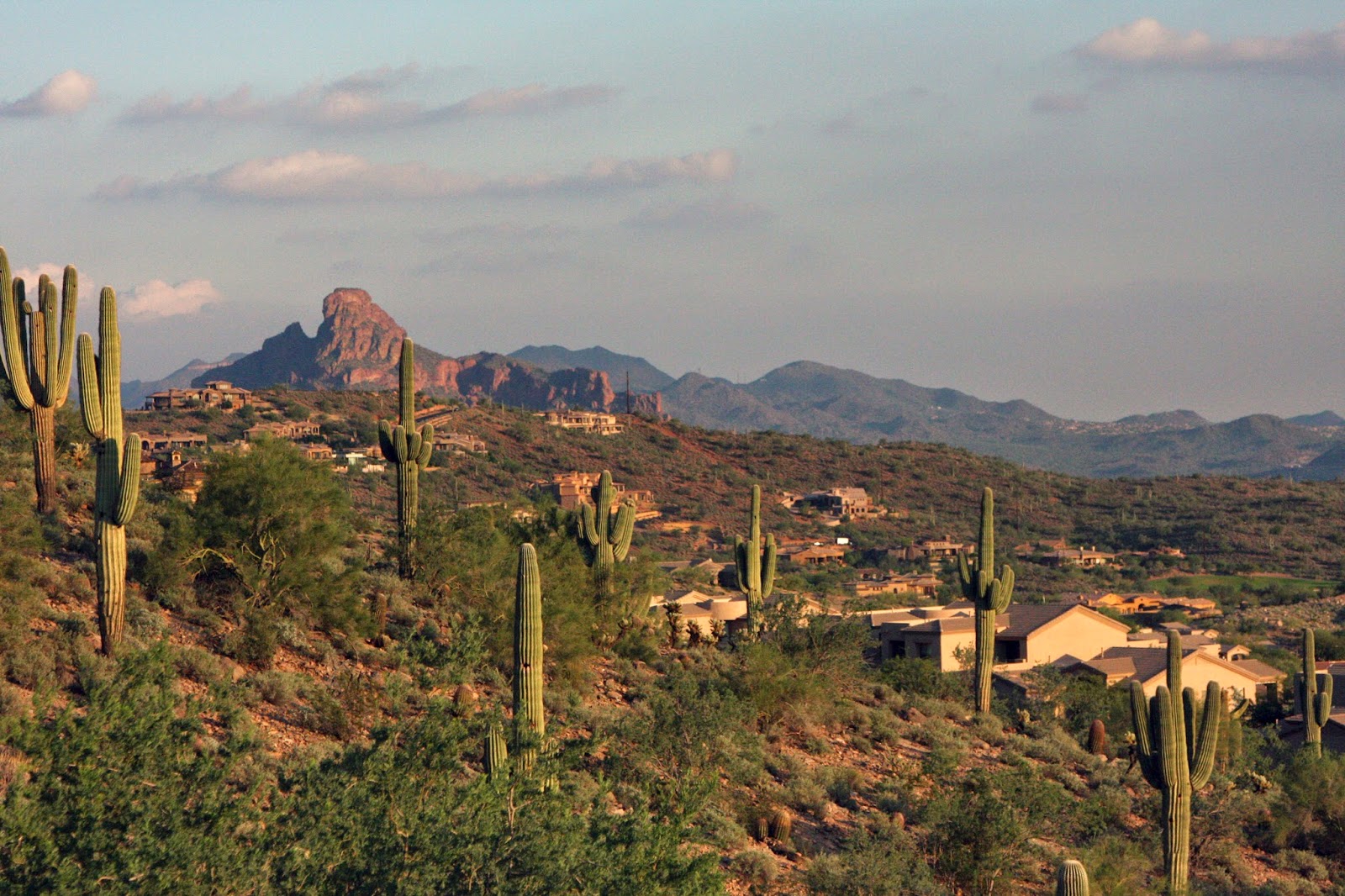 The following appeared in the January, 2015 issue of Destinations Travel Magazine
http://destinationstravelmagazine.com/2015DestinationWeddings/#/90

Cowboy boots with your couture gown, cacti in the centerpieces; barbecues instead of ballrooms and bordellos instead of bridal suites – this is how the West is wed.

From elegant services set against stunning sunsets to non-traditional, cowboy-themed pageantry, the American Southwest offers unique options for tying the knot. Scottsdale, Arizona and the surrounding region, in particular, utilizes its reputation as a well-known vacation destination as an impetus for destination weddings.

When Brian Hartigan and fiancée Kristine McDonough sought to venture far from their Massachusetts home for their big day, they honed in on Arizona as their desired destination, for the unparalleled scenery, long list of things for their guests to do, and almost guaranteed good weather.

The couple visited multiple venues around the greater Scottsdale region and was enamored with almost every one, citing the endless supply of beauty mixed with a rustic charm unknown to other parts of the country. Ultimately, however, it was a resort tucked into the saguaro cactuses and scorched mountains of a town named Fountain Hills that won over the couple and, accordingly, the hundred guests who attended their wedding.

Like an oasis along a mountain ridge, CopperWynd Resort boasts an extraordinary panoramic view of the surrounding Sonoran desert and rugged mountain range amidst lush native vegetation and flowers. Onsite accommodations include luxury hotel rooms overlooking the valley below, as well as an entire neighborhood of large family villas. As the desert sun sets over the adjacent mountain ridge, the best view is typically from a room or villa balcony, where a glass of wine and a lounge chair make for the single best tourist attraction in Arizona. 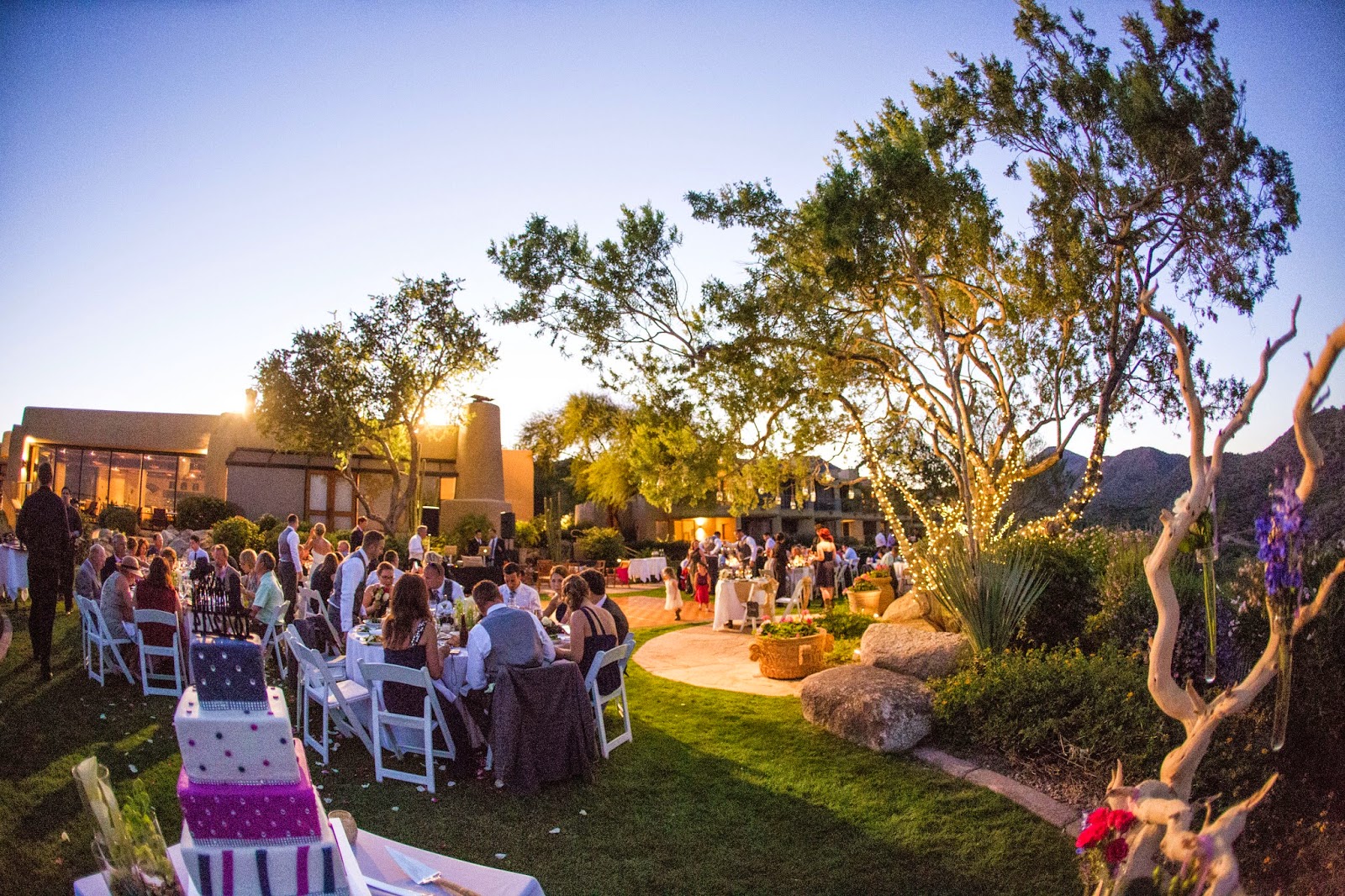 But the resort’s wedding venue, set atop an emerald green bluff overlooking the endless desert-scape, brings CopperWynd from a must-see to a must-marry.

Days before the Hartigan/McDonough wedding, staff bustled around the grounds planting new flowers to take advantage of the recent, rare rains. The result was a mesmerizing contrast as the bride’s white gown flowed into view around the traditional Southwestern sandy building, past small explosions of color, across the green lawn to the altar. To further add to this surreal setting, the couple worked with local vendors to add local touches, like cacti, sun-bleached tree branches to frame the altar, and mason jars filled with candles hanging from an adjacent tree. 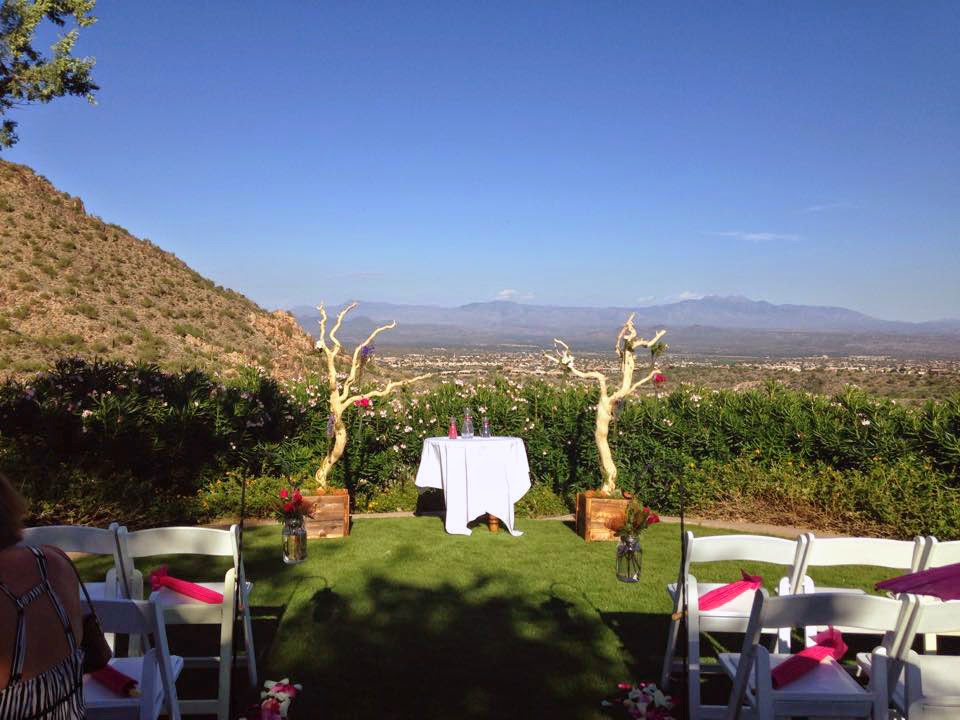 Planners also ensured the timing of the ceremony synced with the resort’s most attractive feature: the sunset. At the most poignant moment of the nuptials, the couple and the desert backdrop were bathed in a romantic orange glow.

For those looking to get hitched in a more nostalgic and creative place, couples need not travel very far from Scottsdale to find another venue that captures the imagination and revels in the traditions of the Old West. Goldfield Ghost Town, located near Apache Junction along the historic Apache Trail, is the place for a cowboy-inspired Old West wedding, set amongst an old time 19th century village.

Goldfield brings a bit of hokey tourism to the party, which in this case is a good thing. You’d look out of place without boots, spurs and Stetsons.

The town sits on a hill in the shadow of the impressive and imposing Superstition Mountains, which themselves are worth a ride out to this remote location. They loom in a beautiful and mysterious way over this small town, which consists of a main street with a few offshoots, an old mine, a perimeter railroad, shops, a saloon, a bordello and a chapel at the very top of the bluff. 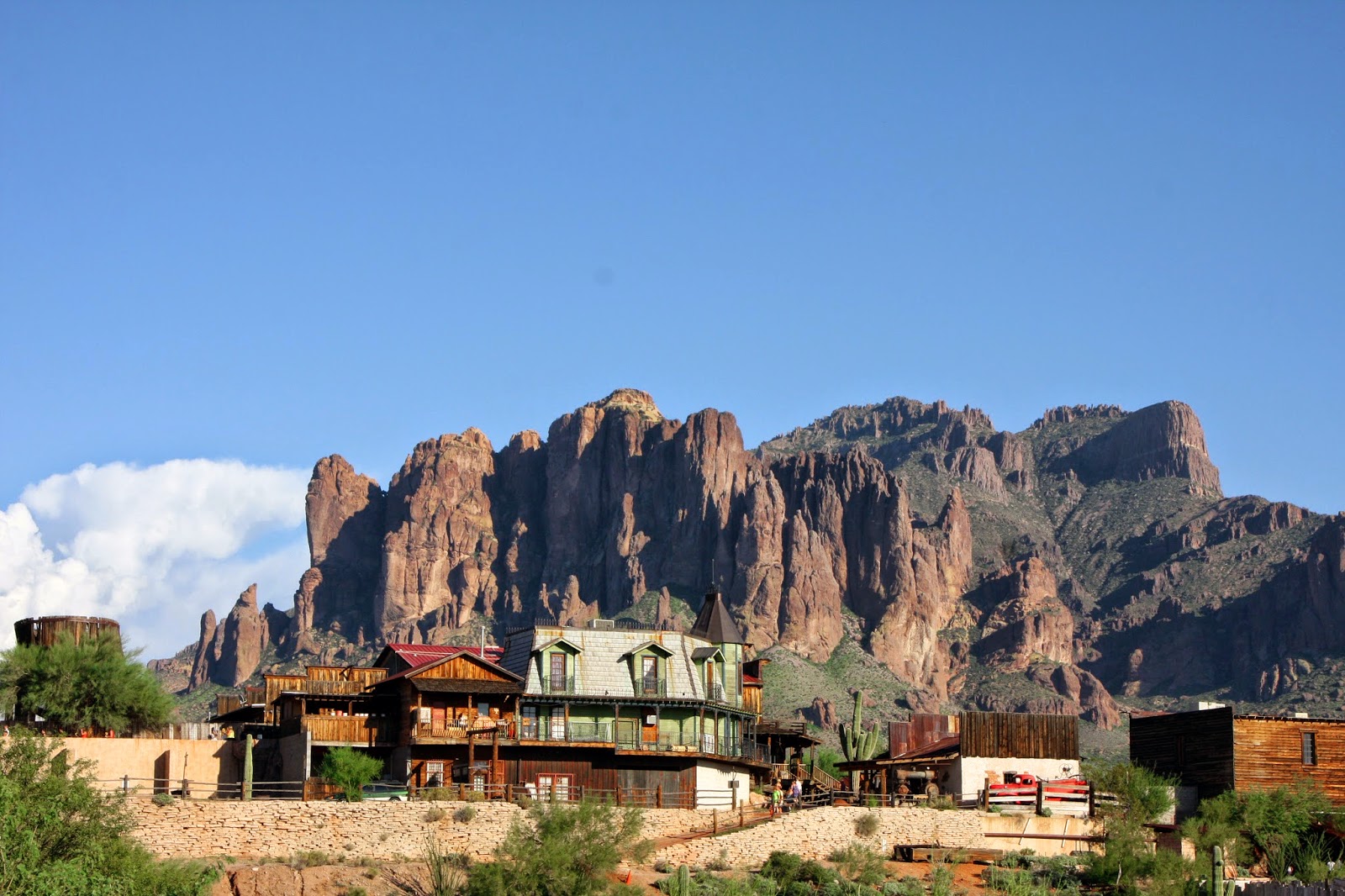 The Church at the Mount performs multiple styles of wedding ceremonies, from traditional to themed. Ceremonies can take place in period costume, feature carriage and horseback rides for the couple, or even a staged stick up. It’s an easy stroll, albeit through dusty town roads, to an indoor or outdoor reception at the Mammoth Saloon and Steakhouse. And it’s an even easier time at Lulu’s Bordello suite, where they will gladly put up the happy couple.

Scottsdale’s matrimonial venues are not simply for the nuptial blessings. With so many golf courses, attractions, ranches and National Parks, the region provides for a comprehensive wedding experience.
Greasewood Flat, located in the dusty outskirts of Scottsdale, is an outdoor cowboy playground. From horseshoe pits and open-air barbecue to whiskey bar stalls and a dance floor under the stars, this local watering hole hosts groups large and small to enjoy a rustic gathering. The setting is perfect for a pre-wedding party that welcomes out-of-town guests and introduces them to some local cuisine and culture.

The Hartigan/McDonough wedding, for example, brought their guests to Greasewood Flat for their rehearsal dinner, renting out a large section of the grounds filled with picnic tables and covered by a wooden lean-to. Staff barbecued hamburgers, chicken and pulled pork while guests played horseshoes and listened to the live band rattle off traditional country songs. The couple’s family and friends perused the scenery, animal stalls and saloon and mingled with the other patrons who had settled into the venue’s main area. 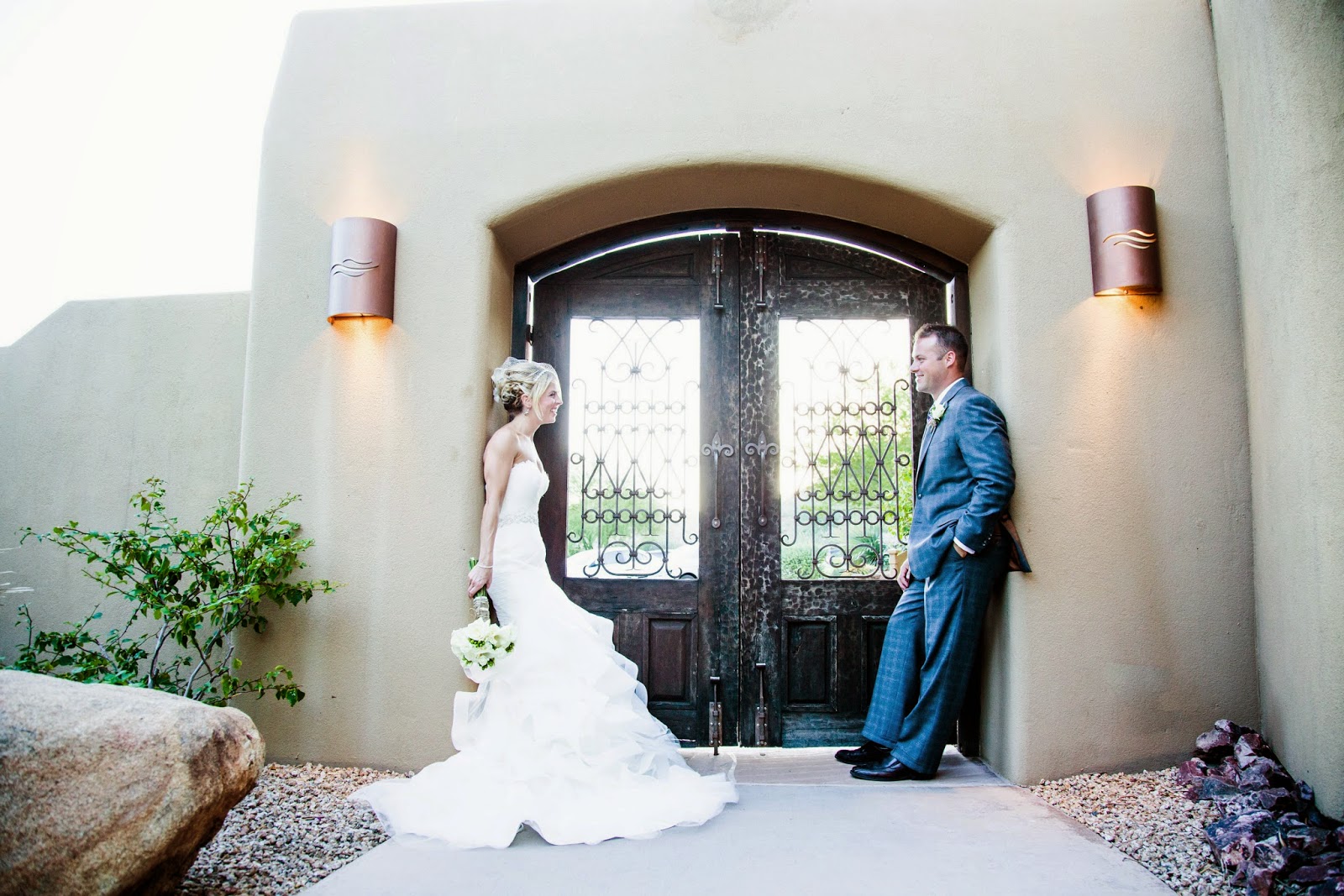 Strings of lights wove through the trees and along the ramshackle buildings throughout the venue. But if one was to step just a few feet away the desert sky was just as well lit from innumerable stars.
It was under those stars that the bride and groom were called out by the band to perform the two-step. Brian and Kristine kicked off just as the band struck up the first note of a slow, romantic cowboy ballad. At the center of the dance floor was a wagon-wheel-topped lamppost; they whirled around it, the spinning like the spokes while the music hummed along. The only thing brighter than the stars and strings of lights was the bride’s smile. When the song ended the lead singer congratulated the couple and led an applause that rumbled from family and friends all the way through the hundred other locals sipping whiskey at Greasewood Flat.

Traditional or non-traditional, elegant or rustic, Southwestern venues offer a variety of fun, unique options set against some of the most striking natural scenery in America. And one thing is as certain as the Arizona heat: in the Old West, a couple can mosey down the aisle in style.