During the evening an artistic air wafts over Amsterdam’s museum-studded park Museumplein. The magnificent Rijksmuseum, recently restored and renovated, is warehouse of historic masterpieces, and the exterior’s sweeping grandeur, spotlighted from the surrounding gardens, is a work of art in itself. Tourists and locals play and pose amongst the oversized, recognizable, “I amsterdam” letters, which take on ethereal form from nighttime mood lighting. The entire scene shimmers and distorts in an elongated reflecting pool. And at the far corner of the park, past the gardens, café and outdoor art exhibits, the Van Gogh museum inhales the artistic air and transports visitors to the world of a virtuoso.

Vincent Van Gogh had the rare ability to capture viewers with his paintings; leaving them somewhere between genius and madness, flush with vivid colors, distinctive techniques and deep emotion. Fittingly, his museum works from that same palette.

The Van Gogh Museum weaves the artist’s trademark individuality and layered emotions into its exhibition space. And like many of Van Gogh’s paintings, a quick glance does not do the museum justice. Luckily, the museum offers late hours until 10:00pm on Friday nights, complete with cocktails, moody music and interactive activities. The result, much like a Van Gogh painting, is a multidimensional and somewhat hazy experience that reveals the deeper stories behind the artist and his works.

The building itself is not filled to the brim, as you might expect from a museum dedicated to one person, and some famous pieces like The Starry Night are not located here. Regardless, the museum houses the world’s largest collection of Van Gogh works, including well-known masterpieces such as the vibrant Sunflowers and The Bedroom, and the colorful but mournful Wheatfield with Crows, one of his last paintings.

Large portions of the works are grouped chronologically, while other sections focus on comparing pieces and highlighting specific aspects of his work. The collection ranges from early works to his final masterpieces, and also displays sketches and writings. Taken all at once, the collection demonstrates his artistic evolution and personal devolution.

The Potato Eaters from 1885, for example, is a dark, intricately detailed scene where Van Gogh plays with light and shadow. But by 1889, Undergrowth portrays Van Gogh’s trademark heavy brush strokes and use of color; varying shades of green, yellow and blue are pulled from the underbrush up the twisting trees, adding a fluid, wave-like motion to a dense forest landscape.

The contrast of Van Gogh’s own works is, in many instances, stark and shocking – bright colors versus stormy landscapes, detailed sketches versus harsh brush strokes. The range of paintings shows the range of Van Gogh’s skill, as well as his cutting-edge use of novel techniques, and how his own emotions so vividly play out in color on a canvas stage.

The Van Gogh Museum tells the story of the artist’s tormented history through his artwork, and also pays special attention to his influences. As a complement, they include paintings by contemporaries and friends of Van Gogh, and in some cases written correspondences. In many instances, works from friends like Emile Bernard and Paul Gauguin are placed in sequence next to Van Gogh’s own interpretations. The same is done with the international cultures that influenced him, from France to Japan. The result on many walls is a seamless transition that explains, without words, a surprising array of inspirations.

Van Gogh’s Almond Blossom, for example, painted in 1890 as a gift for his newborn nephew, displays very clear Japanese influences, with delicate, wispy branches set against a vivid color scheme.

As an artist Van Gogh evolved, and true to form, his museum also has not been content to remain static in its aesthetics. The main building opened in 1973 but renovations updated and modernized the structure with a new exhibition wing in the late 1990s. Mobile apps, classes and special events were developed for a more inclusive experience. A new glass entrance building is slated to open in the summer of 2015.

So while his painting by the same name is brilliant and beautiful, spending an actual starry night in Amsterdam is a much more fitting way to experience Vincent Van Gogh.
Posted by Mike at 1:35 PM No comments:

The Behemoth in Black Canyon 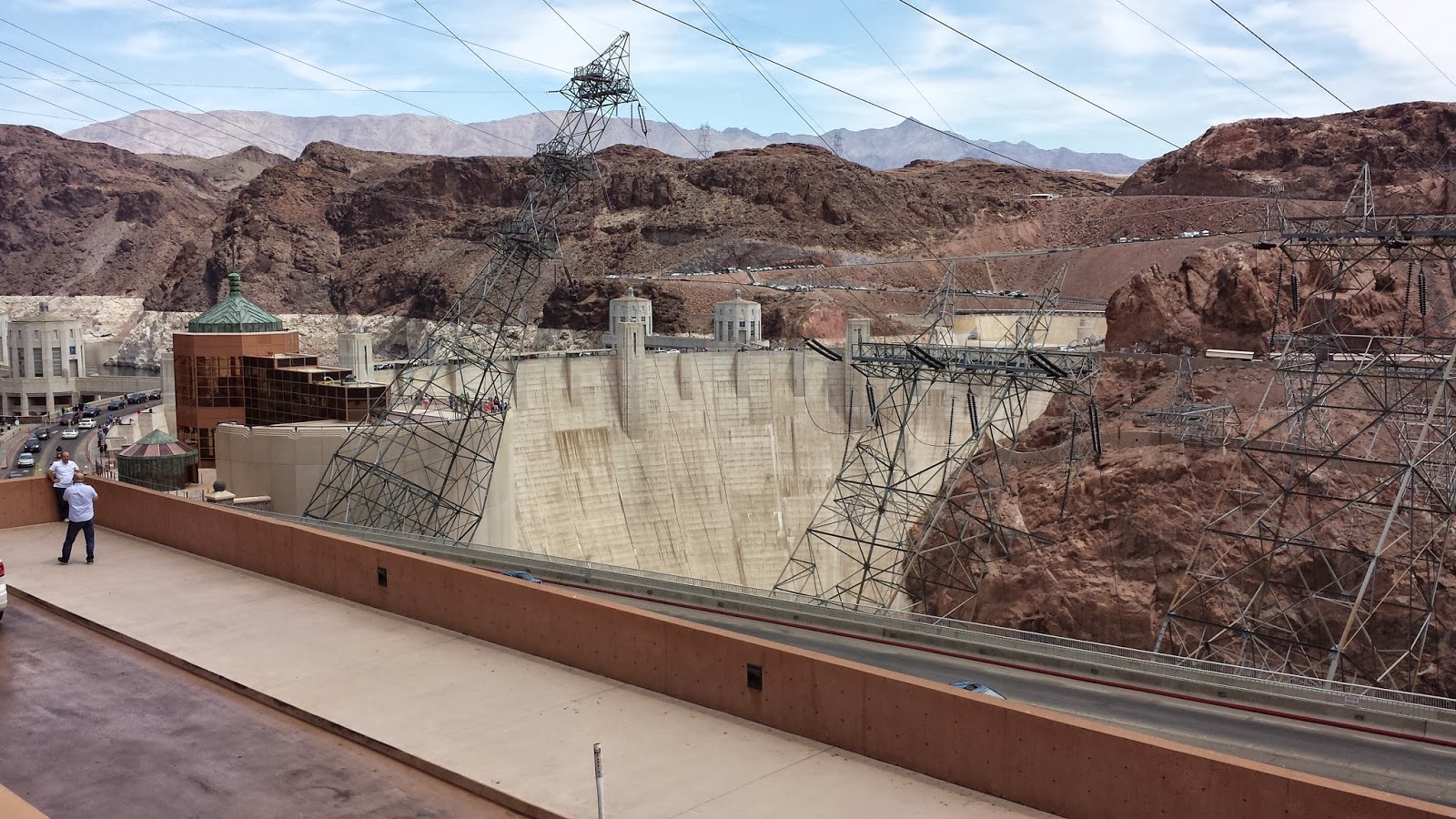 America’s most memorable attractions are known for one common theme: their enormity. California Redwoods dwarf surrounding foliage. The Grand Canyon carves a massive cleft in the land. The Rocky Mountains reach to the heavens. Roadside attractions range from the largest ball of twine to the largest bottle of catsup. Clearly, Americans like things larger-than-life.

But one structure located in America’s Southwest outpaces them all when it comes to actual, practical utility – because it is actually a utility plant.

The Hoover Dam, wedged down into the craggy, plunging Black Canyon, is a behemoth concrete cascade that spans two states while controlling and contorting a force of nature – the Colorado River.

Located 45 minutes from the Las Vegas Strip, the Hoover Dam is an easy, worthwhile day trip away from Sin City. However, the thought of leaving Las Vegas to go see a mound of concrete in the desert may not appeal to the wild and crazy vacationers dancing, gambling and eating their way through the casino resorts. But it should.

For all the awesome man-made sights on the Strip – the curving Wynn towers, the MGM’s massive golden lion, the Eiffel Tower – I would argue none of them can compare to the Hoover Dam when it comes to sheer immensity. It is awe-inspiring, over-the top, larger-than-life; everything Vegas embodies. But you remove the stomach-churning decadence and add in a large dose of American ingenuity. Besides, getting some fresh air is a welcome change from the recirculated casino oxygen.

The ‘wow’ moments come early and often when you arrive at the Hoover Dam from the Nevada side. As soon as you step out of the car at the parking structure, you notice the massive wires overhead. Let your eyes follow them on their run down to the steel towers jutting from the cliffs, before they leap into oblivion as they cross the gorge.

Up to the right, the swooping bypass bridge – itself a marvel of modern engineering – soars among the clouds, allowing traffic to flow and not clog up the road atop the Hoover Dam.

The visitor’s center across the road from the parking structure is a good stop and the launching point for the power plant tours that take you deep into the heart of Hoover Dam’s inner workings. It also affords a great view.

But being atop the dam is undoubtedly the most exciting aspect of visiting this National Historic Landmark.

As you stroll out onto the dam, you pass tall statues and a memorial paying homage to those who sacrificed to construct this engineering monster. Also tucked away into the side of the rock face is a small plaque with a dog embossed on it. It marks the grave where the workers’ mascot is buried: a stray puppy who accompanied the workers from the crew campsite to the worksite every day.

The height, the size, the smooth, curving drop all the way down to the river – it is breathtaking from every angle. I started on the left side of the road, looking up the mighty Colorado River at the long arms reaching out into space, ending in the lanky cylindrical turbine towers. There are two sets of two, standing erect like guards outside castle gates. 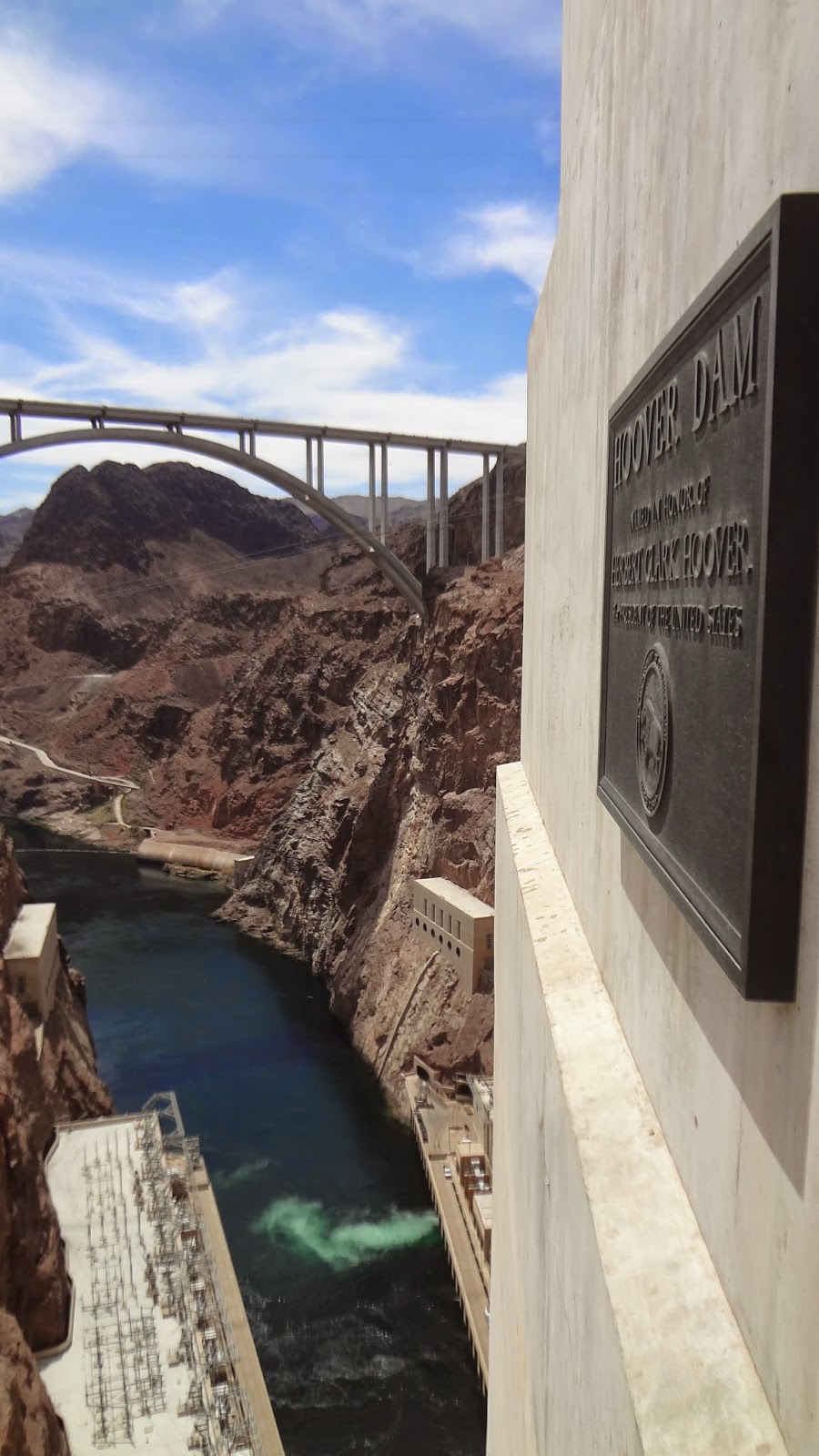 I kept walking and as I did stepped from Nevada to Arizona. On one set of towers is a clock marking the time in the Pacific Time Zone, while the other has a clock marking the Mountain Time Zone. In the middle, a plaque from 1955 commemorates when the American Society of Civil Engineers named the Hoover Dam one of the seven modern civil engineering wonders in the United States. The plaque also marks the state line between Nevada and Arizona.

I crossed to the other side of the road atop the dam and gazed over the railing from one of the protrusions. The view down was iconic: a pale white, smooth curving slide, plunging to the facility and river far below. It was dizzying, and the stomach lurch came each time I looked over the edge.

The history and factual information woven throughout the dam and the power plant add to the extraordinary sights. The power plant tour provides much of it, putting you face to face with the gargantuan generators at the heart of the Dam. Each year the plant generates enough power to serve 1.3 million people and is still one of the largest hydropower plants in the U.S.

In the visitors center I learned the history of the dam’s construction, from start to finish.
From 1931 to completion in 1935, the daredevil workers erected the dam, defying death at every turn. The dam was named for 31st President Herbert Hoover. It was completed ahead of schedule and under budget. The Hoover Dam is a steadfast testament to America’s ingenuity and pioneering spirit.

Everything about the Hoover Dam is big: wide views, a vast and fascinating history, and a big rush of excitement every time you peer over the edge. It all adds up to a Dam good time.
Posted by Mike at 7:18 AM No comments: