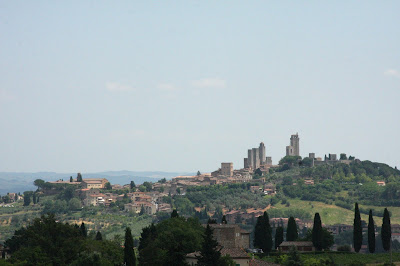 There was a moment, about three quarters of the way up, as the steps became steeper and the railing a little flimsier, when I considered the ascent a bad idea. My two year old daughter clung to me like unripe grapes to the vine, and in turn I clutched her with one arm so that my other was free to hold the railings.

The steps we had already conquered swirled around the inside wall of a centuries-old stone tower. We had reached a landing, looked down the center abyss to the ground far below, and then up at the remaining climb up an old wooden ladder. It was stifling hot and the air inside the medieval fortification pressed heavy on the body. It didn’t help that I had hoisted an extra 30 pounds up the stairs. 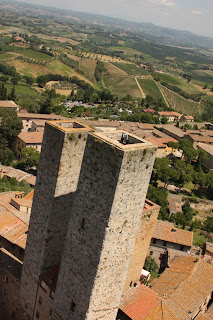 As my daughter and I slowly, carefully slid up the almost vertical ladder – the final lunge up the tower – my hands ached from gripping the worn rungs and her little body. The excitement I had felt with the first step down below was now hard to conjure.

We reached the last ladder rung. Simultaneously my daughter’s little head and my big one poked up through the hatch and into the glaring Italian sunlight. We emerged from the ladder onto the crown of San Gimignano’s tallest tower, the Torre Grossa. I was exhausted, hot and my knees were trembling.
Was the climb worth it? My eyes adjusted to the bright sunlight and as the whole expanse of Tuscany came into focus, hills and vineyard and cypress trees sprawled in every direction, the answer was instantly and profoundly obvious: yes it is.

Every direction was a postcard panorama. Leaning over one side of the Torre Grossa, I pointed out to my daughter the hills, green and gold in midsummer splendor, rolling and cresting like waves to the horizon. Over on the other side, vineyards pockmarked the slopes, not yet heavy with fruit but close to providing fodder for the region’s local chianti and vernaccia wine. Still in another direction, the rooftops of San Gimignano jutted up and down, every once in a while broken by a medieval tower, like stepping stones leading the way to the walled fortress on the edge of town. My daughter pointed out the piazzas buzzing with activity underneath us.

Since we stood atop the tallest tower in San Gimignano, we had the benefit of looking down on the town’s other towers. Only eleven stone towers still stand out of more than 70 that once dominated the town in its medieval heyday, each a physical manifestation of power, built by the wealthy to show off (and to sometimes drop hot oil on potential intruders).

Every Tuscan hilltown has a unique trait, whether it is a landmark or local cuisine or artisan craft. Because of this, visiting a Tuscan hilltown is an intimate affair, like getting to know a new member of the same family. They are all distinctly Tuscan but also memorable for their own distinct reason.

The towers are San Gimignano’s calling card, giving visitors a sight unseen anywhere else in the world – Tuscany’s version of a downtown skyline. 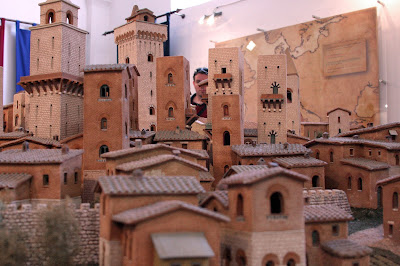 Because of this novelty, and the porcupine-like city photos it generates, San Gimignano is frequently a stop on many tour bus routes, making it a crowded place during the high season. But that doesn’t mean it is not worth visiting. Even with crowds, this small Tuscan hilltown has plenty to explore, from its churches, to the great views at the aforementioned fortress, to the small workshop off the main drag that has a full miniature model of the entire town.

As with most every small village or big city in Italy, San Gimignano is most Italian (and therefore most enjoyable), when experienced unscripted. Getting lost among the steep cobbled walkways off the main thoroughfare and sticking around in the evening hours after the tour buses have gone, will allow your eyes to feast on a relaxed San Gimignano. The whole town exhales as the tour buses clatter away.

I was lucky to be staying at a villa within a ten minute drive of San Gimignano, so experiencing it in both ways was easy. The difference was literally night and day. 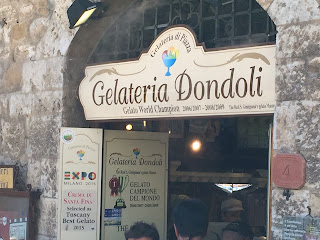 We spent several evenings strolling the streets alongside locals and other lucky overnight tourists. Peaceful, small town calm settled over the cafés and piazzas, save for the handful of children running around the central stone well in Piazza de la Cisterna. But who could blame them, with Gelateria Dondoli, one of the world’s premier gelato shops mere steps away. Award-winning in every way, my entire family indulged in Sergio’s frozen master craft on numerous occasions, sampling traditional flavors and the more obscure, like berry rosemary and eggnog vin santo (sweet white wine).

Dinners were unrushed and unforgettable, as most are in Tuscan hamlets. We ate at a restaurant situated in a garden high atop the town, had some quick pizza at a café off Piazza Cisterna, and snagged some wild boar sausage at a small shop. 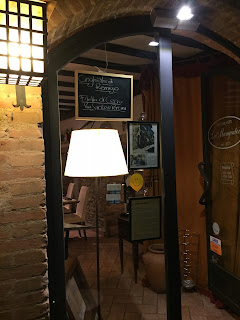 On our last night, we indulged at La Mangiatoia Ristorante. My fork cut right through a local venison medallion glazed with fig sauce and in-season mushrooms, the savory meat bursting with flavor. Simple pasta dishes, like wild boar ragu and homemade pesto, thoroughly pleased the entire family. In all, the meal was a highlight during a week of culinary excellence in Tuscany. And of course, even with dessert and after-dinner drinks at La Mangiatoia, we had to end the evening at Dondoli.

To consume the food here takes little effort, even though to consume the views requires a bit of leg work. Nevertheless, San Gimignano fulfills in both regards.

Back on top of Torre Grossa, before we descended, my daughter spotted some bright purple flowers growing out of the tower’s rampart. I picked one and gave it to her. She clutched it tightly, and I clutched her, as we prepared to back down the ladder to the landing and down the staircase.
“It’s so beautiful,” she said.

I smiled at her, and then we both soaked in one more glance of the striking Tuscan vista before ducking down through the ladder hatch. My response to her was instantly and profoundly obvious: “Yes, it is.” 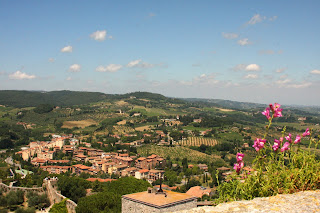 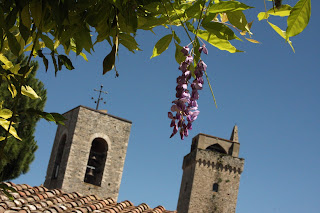 History woven into your Massachusetts vacation

History is woven throughout Massachusetts, and to this day remains one of the state’s top tourism selling points. From Revolutionary War battlefields to tea parties to a legendary baseball stadium, some of America’s most well-known and celebrated milestones took place in the Bay State.


But while many visitors to the Commonwealth of Massachusetts stick to the greater Boston area or Cape Cod, there is another destination about 40 minutes north that has long been an important part of the region’s very fabric – literally.

The City of Lowell has produced its fair share of historical milestones, as well as game-changing figures of import from artists, writers and actresses to politicians and athletes. But Lowell was and remains a mill town, embracing its role in American progress by way of the Industrial Revolution.

The city was a pioneer of the textile industry during the 1800s, producing and developing technology that brought about major changes in American manufacturing. Along with that innovation also came key advances in the labor, immigrant and women’s rights movements. 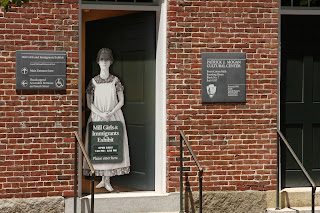 In the ensuing century, the health of the once thriving mills ebbed and flowed much like the canals flowing nearby. Today, much of the city’s industrial history enjoys attention of developers, residents and visitors alike. Mills are being repurposed or refurbished and historically significant sites dot the downtown.

The centerpiece is the Lowell National Historical Park, located downtown amidst the old mill buildings and canal system.

Guided tours inside and outside give an in-depth and surprisingly interesting look at how enterprising individuals harnessed nature to turn cotton into textile and drive American industry. History, engineering and the environment all come together in an intriguing narrative, complemented by exhibits, canal boat tours and a working era trolley, and hands-on activities, crafts and events for children and families.

Perhaps the most memorable stop, other than the bright yellow trolley ride along the canals, is the working mill floor inside the park’s Boott Cotton Mills museum. Looms clack and clang all around visitors, with gears and machinery spinning from floor to ceiling. Check out the old timecard punch machine and then imagine the workers slipping and dodging in between the looms. The noise captures the attention as much as the final product. The restored machinery is in working order and produces thread, which can be shown to you by one of the staff dressed in era-garb. In fact, the gift shop sells towels made by the onsite restored looms. 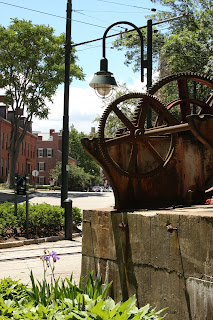 Outside, the park weaves itself through the downtown, with canal walks and pathways marked by signage describing significant historical information. A walk along the canals, or behind the museum along the Merrimack River, provides a modern look at just how interwoven mill life was with nature and the rest of the city. Trolley tracks cross main streets and machinery and water control stations still stand as landmarks.

A Lowell day trip is easy during any stay in the Commonwealth, and the city has lodging, food and entertainment options, many of which continue the mill city theme.

Going hand-in-hand with the immigrant workers who have helped fuel the city’s industry, Lowell enjoys a brilliant tapestry of diverse cultures and artists. Famous Lowellian, writer Jack Kerouac, has a park in his honor. The city is also home to the Whistler House Museum of Art, the birthplace of American artist James McNeill Whistler. Summer concerts echo from Boarding House Park, and the Lowell Folk Festival (July 29 – 31) is internationally known for its performers, food, activities and music. 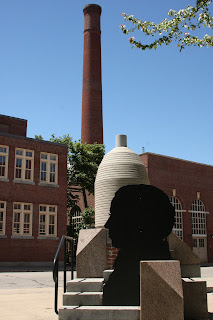 Summer of 2016 gives vacationers plenty of added reason to visit not just Lowell National Historical Park, but any of America’s National Parks. On Aug. 25, the National Park Service turns 100 years old. From Yosemite to Yellowstone to Acadia to Lowell, the National Park Service touches every state and preserves natural and historical treasures that appeal to all interests and ages. The NPS’s Find Your Park initiative, running since last year, incorporates online and social media to bring stories and images of the diverse array of experiences to be had at America’s national parks.

It can be cost effective, too. Many parks are free, but for those that aren’t, from Aug. 25 through Aug. 28, all national parks will not charge admission in recognition of the centennial. Or, if you have a fourth-grade child, admission to any national park is free all year thanks to the Every Kid in a Park Program (more info at www.nps.gov).

Lowell is a gritty town, which drives home the scrappy, industrial beginnings woven through its eclectic offerings.


This article appeared in the Wicked Local weekly papers Wherever It Takes column for July, 2016 - and also in Destinations Travel Magazine, July, 2016 edition
Posted by Mike at 12:00 PM No comments: