A few of my favorite things about Salzburg 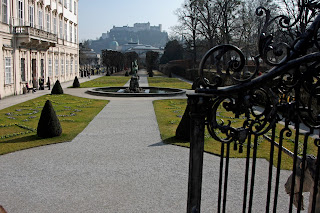 My daughter breaks out into elevated decibel song whenever she hears Julie Andrews begin, “Do-Re-Mi.”

If she’s in the car and the tune pops across Pandora, she’ll sing right along with Maria as the nanny teaches the Von Trapp children how to do something they clearly already mastered. If we turn on The Sound of Music movie, my daughter will gallop around the living room as if she’s twirling around the green foothills of the Alps.

And in all cases, my wife and I will at the very least hum along with her.

Regardless of location, one thing is certain: The Sound of Music and its songs do not escape one’s memory bank quickly. Rightfully so, based on the genius of Rodgers & Hammerstein and the virtuosity of cinematic legends like Andrews and Christopher Plummer.

But the movie’s consequence is of so much more than just catchy tunes nagging at the back of our minds. The Sound of Music is a feast for the eyes as much as for the ears. The sweeping mountainscapes, palatial settings and historic scenes have become iconic in their own right. Take, for example, the glass gazebo that provided the romantic backdrop for Liesl and Rolfe’s upbeat ditty and for Maria and the Captain’s first kiss.

Whereas the audible legacy of this cinematic classic is ingrained in song, much of the visual legacy is that of Salzburg, Austria.

Hanging in my living room – right by the television where my daughter watches and mimics the youngest Von Trapp daughter – is a large photo of the Salzburg skyline, topped by the formidable Hohensalzburg Fortress. I snapped this picture from a vantage point down along the ridge that runs above the city, taken around sunset when the embattlement and the city spires were flush with pinkish solar hue. With a subtle, natural but vivid color spectrum spanning blues to oranges to pinks, this is one of my favorite travel photos. That might also have to do with the memories I have from my time in that exquisite city, and keeping the photo hanging in a prominent place allows me recall them frequently.

This panorama is spotted in the film during, “Do-Re-Mi,” and is just one of many of the film’s settings you can visit while in and around Salzburg.

At the top of the list are the exquisite Mirabell Palace and the lush Mirabell Gardens. We took a pleasant stroll through the grounds, bumping into the gnome statues featured in the film, located in the Gnome Garden. We also weaved through the hedge tunnel, bobbed up and down the stairs, and circled the famous Pegasus fountain, just like the cinematic Von Trapp kids.

Even if you aren’t familiar with the movie – and full confession, I was not a huge fan prior to my own trip to Salzburg – visiting the film locations are still worthwhile.

For more in-depth coverage, there are myriad tour companies around Salzburg that will whisk you away to film locations. We chose Panorama Tours and were rewarded with a jovial and informative tour guide, whose knowledge of history and architecture rivaled his ability to get the entire bus singing in harmony with Julie Andrews.

The tour was worth it just for the opportunity to get outside the city limits to the beautiful lakes region. Passing several lakes and rolling green countryside, our bus arrived at Lake Mondsee, where we explored the picturesque town of the same name and its famous fluffy yellow cathedral, where they filmed Maria and Captain Von Trapp’s wedding.

Our tour also stopped at Hellbrunn Palace to see the aforementioned gazebo, as well as Leopoldskron Palace, which afforded views of the mansion used for exterior shots of the Captain’s backyard.

Salzburg itself benefits from its connection to The Sound of Music, but as a vacation destination the city hardly needs it.

There is inherent charm throughout Salzburg, like so many Austrian and German towns, in its old town, its plazas and its people.

We got lost trekking between buildings and emptied out into a wide plaza where local men were engaged in a game of chess. But not just any chess – oversized two-foot chess pieces on a chessboard painted on the ground. We sat and watched while they battled and horse-drawn carriages trotted by.

As Mozart’s hometown, there are numerous opportunities to experience the town’s contributions to the musical spectrum, such as the musician’s birthplace or Mozartplatz, which features a statue to the virtuoso.

The impressive Hohensalzburg Fortress heaves above the city and from it, the hike along the ridge provides one of the most stunning panoramas in Europe. But the view is not the only reward.

We trekked to the Augustiner Braustuebl, a sprawling, boisterous brewpub drowning in beer. The spectacle is as awesome as what fills your massive stone stein. To get a beer, I stood in a line that snaked past wooden shelves covered in huge mugs. Not knowing protocol, I did what the locals did: grabbed a couple steins, washed them out in the constantly running stone fountain and arrived in front of the mustachioed kegmeister. He asked simply (in German), “light or dark.” Then stepped back to the two gargantuan wooden kegs behind him, filled them to sloshing and shooed me away, beers in hand.

And of course, as is recommended in these parts, we sat at a communal table in one of the timbered halls to engage in rowdy conversation with our fellow beer lovers. Despite the numerous rounds, it was as unforgettable as, “Do-Re-Mi.”