I See The Light 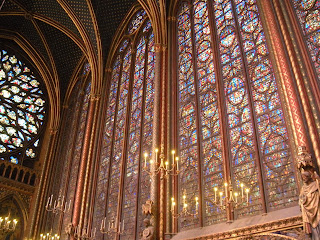 Tucked away along a side road running perpendicular to Notre Dame (which in itself is mythical in atmosphere and impressive in stature) hides the chapel at Saint Chappelle. Like most other landmarks in Paris, it is a tourist destination, albeit a little less known and a little less mobbed. There really is only one reason to visit there - kick yourself if you don't do so on a sunny day - but that one reason will leave your neck permanently craned and your eyes spoiled forever. Because they will never see colors like the did in Saint Chappelle. The room is about 80 yards long, the roof just as high. Covering every inch of the walls, stained glass windows reach up to the vaulted ceiling. The sun moseys on in from the outside and suddenly purples, blues, greens, yellows and reds are skipping around mid-air. Forget this is a church, this room is a religious experience without all the Christian relics and symbolism. I'm still rubbing my jaw from all the times it hit the floor. 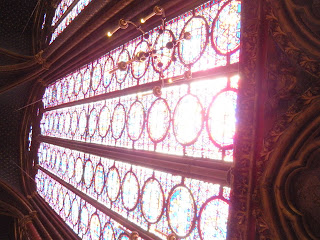 But what actually made me smile the most was the permanent smile on my wife, Danielle's face. You see, she's been waiting to return here for just about twelve years. She visited Saint Chappelle on her European tour in high school and it quickly became her favorite spot. She mentioned it in our dating days, she described it when we were planning this trip. But to see her face and hear the little gasp of delight as we stepped into the room, that was worth the price of admission (which coincidentally enough was zero, since Saint Chappelle is covered on our Paris Museum Pass - 34 Euro and we can enter any museum in Paris for two days in a special line without paying, I highly recommend it).
As sappy as it may sound, that was the highlight of my day. Yeah, the Arc du Triomph (sp?) was impressive and the view from atop it astounding; Orsay Museum hid a different masterpiece in its little nooks (I can't even imagine what the Louvre will be like tomorrow, my feet and brain hurt already just thinking about it); Sacre Cour was beautiful, even though the surrounding area had a seedy feel; the walk down the Champs E'Lysees had my head spinning and my wallet crying. But those moments that you can't get from the Rick Steve's guidebook, that you can't capture with your Nikon, are the ones you remember the longest. 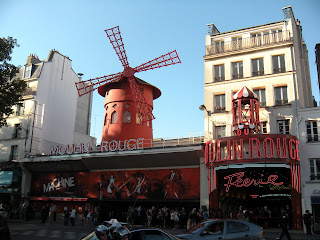 Rick's a good guy, one of the best people I've never met in person, in fact. But as I said to Danielle today, sometimes he's just a suggestion, not a to-do list. And Rick, I'm absolutely sure, would agree with me. Which is why on our walk down the hill from Sacre Cour, I took a right. Then a left. Then I don't know what. I used the map to put us in the vicinity of the street that may or may not take us to Moulin Rouge (tourist trap in a seedy XXX part of town - photograph the big red windmill and move along).

Along the way we found a cheese shop. We stopped in a bought some cheese, somehow, from the shopkeep who didn't speak English. We ended up with a small wheel of soft, stinky French cheese that was too pungent to eat on its own. So around the next corner, when we smelled fresh baked bread, voila! Another left, another bakery, another baguette. Further down that hill we stopped into a wine shop and scooped up two bottle of what we think is local wine (we can't translate the bottles but who cares, its wine - oh and my French pronunciation must be getting good because my Bonjour, Monsieur made the shopkeep start a conversation with me in French. Danielle had to tell him we had no idea what he was talking about). The last stop before the train home was a tiny shop filled with mustards, jams, spices, pattes, salts, etc. The jelly sampled would go well with our little dinner. So just like every other Parisian I've seen trekking home from work, we hopped a train with our baguettes, en route to a makeshift French meal. As I sit here polishing off one of the bottles of wine, I must commend myself and my wife - tre bien! 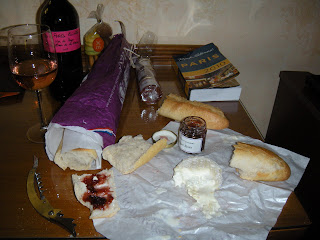 Stupid Tourists: 2 - As we left Saint Chappelle four tourists passed us. How did I know from 30 feet away that they were American? For one, the men were wearing "The Da Vinci Code" baseball hats they obviously bought for their trip to Paris. Two, they were from, I'd guess, Long Island - and I know that by accent and attire. The loudest of the women yelled to her friend across the entry courtyard, "Do you think its real stained glass in there? Pssh, the woman said so but, pssh, I don't know." Stupid Tourists.
Posted by Mike at 6:13 PM