The guttural accented border guard pricks up your ears even before the ink on your passport has time to dry. In that instant, though, America and the English language evaporate into fleurs de lys. You’re in French-Canada and you better start translating, fast. 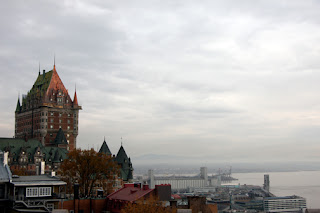 Quebec wastes no time telling you who she is, an obvious identity from the get-go. She's guarded, all defenses raised upon first contact. Its eponymous city along the St. Lawrence is even surrounded by a centuries-old rampart.

Being dropped into a location whose people speak a language different than my own is not new, nor is it frightening, intimidating or frustrating. In most cases it is refreshing and exciting, with that hint of discovery and adventure always associated with international travel.

With Canada (French-speaking Quebec Province, to be fair to the rest of our neighbors to the north), the shock comes from the immediacy of it all.

Even in Switzerland, where we boarded a train speaking French and disembarked into a station labeled solely in German, my ever-fluctuating vernacular adjusted quicker. And that nation tosses three languages around (Italian, French and German) like a juggler on a high wire, if you drop one your life depends on how well you handle the other two. 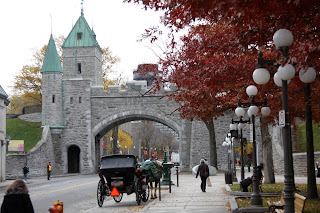 At least there were options in the Alps.

The first sign over the border into Quebec, and every road sign, kilometer marker and billboard to follow, was entirely in French. No warning. No English translation underneath.

When you enter New Hampshire from Massachusetts, the sign says “Welcome” and “Bienvenue.” Not in Quebec.

Yet after an hour humming along the highway, north then sharply northeast, I found myself enjoying the challenge; racking my brain over root words and the similarities to more familiar Romance languages. I was back in that Swiss train station, slack-jawed staring at an unfamiliar departure board. The novelty of Quebec hit me like the 4pm Eurorail to Zurich. I was international in my own car. I was abroad without a customs check. I was overseas simply by crossing the St. Lawrence River.

We approached Quebec City and its uniqueness glinted on the horizon; or was that the chateau copper roof of the Hotel Frontenac, looming over the mighty river as sentinel to Old Town? 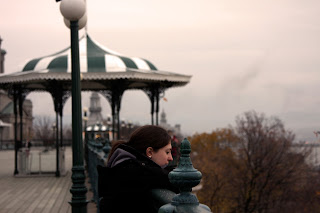 Under the stone archway, behind the walls and the city reminds you she’s different. The walls are there, literal and verbal, but you can simply glide right past them. The city is not what she seems. She’s unlike you – it doesn’t matter who you are.

She’s made up in the European style, yet with a beauty that rises from the working shipyards along the riverbank, through the cobblestone alleys, Parisian row houses and up, up, up the Cap Diamant cliffside, where cannons and horse-drawn carriages alike await all comers. Protected by the illustrious Hotel Frontenac, with spires and multi-tiered chateau roofs concealing a bygone glamour and rich history steeped in winter revelry and French-Canadian lore.

Walking from our Hotel Clarendon, around the corner to the Frontenac and cliffs edge boardwalk, the November gray broke to allow blue sky a few hours indulgence. 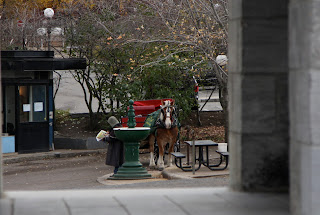 At the railing I looked down and scanned the shops and houses rolling to the riverside. The rooftops were multi-colored, with wooden ladders attached from gutter to peak. Snow removal or chimney cleaning? Probably both, I guessed. When I turned my sights back toward the city, the Frontenac absorbed most of the scene. But around the perimeter waited a military garrison, an old stone Catholic church, a cobblestone street lined with artist stalls and a massive building yanked straight from banks of the Seine.

There was no Eiffel Tower, no Big Ben, no Coliseum. And in that sense, the touristy Europe feel dissipated with the afternoon clouds.

Crowds were slim, due to the off-season. Soon winter would take full hold and the second high-tourist season would begin. But the streets now allowed for strolling.

Even though the store signs, street signs and menu boards were in French, every “Bonjour” was followed by a “hello.” Not once was the city not bilingual in every respect, despite the province’s desire to make everyone else think otherwise. 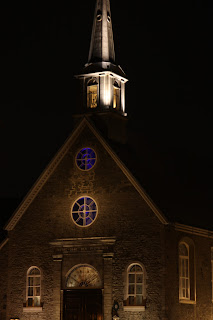 No time-consuming tourist traps. No space-consuming crowds. No brain-consuming translations. This was Europe without the “Europa.”

Quebec City is definitively not American. Nor would I even label her Canadian. She is her own brand of “European.” Accessible, unimposing and can be toppled in a long weekend; and yet, hearty and fulfilling (for the stomach and the soul), vibrant and relaxing, historic without stuffiness.

I found it odd I was only six hours from home. I said so to my wife, as we walked hand in hand along a cobblestone road through the shadow of a stunning chapel belltower.