The sensory experience at Plimoth Plantation 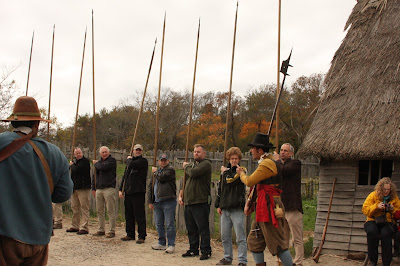 You can’t fully appreciate the weight of a pike until you’re hefting the weapon in formation. Just keeping the metal-spiked twelve-foot pole upright is a difficult task - and then the commander orders you to prepare for engagement.

Put it at an angle in ready stance, he yells. Shift the pole’s awkward girth parallel to the ground, at ear height, he commands. Thrust the business end out over the right shoulder of the compatriot standing mere feet in front of you, he orders. Then, as long as no fellow soldier has been impaled, you are ready to advance.

I was selected by the militia leader at Plimoth Plantation and I was proud of it. In reality, my three-year-old daughter volunteered me and fatherly pride forced me to comply. But regardless of my militaristic motivation, I found myself at the literal center of a small battalion of pike-wielding infantrymen, prepping and practicing the use of colonial-era tactics.

The experience required more focus than any vacationer or visitor would expect. The militia commander was fully engulfed in his character, as are all of the employees in the 17th-century English village section of Plimoth Plantation. And when selected, he expects your very rapt attention as well. With some prodding, and after only a few practice attempts, our small division of twelve pikemen began to move more fluidly as one entity, pikes pointed outward like a soldierly porcupine. 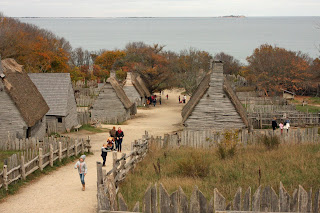 Combined with the drummer’s heavy thuds, the muskets’ ear-splitting cracks and the fiery gunpowder smell, struggling with a pike made real this one aspect of a settler’s existence – and emphasized the full sensory experience you get at Plimoth Plantation.
On a beautiful weekend a few weeks before Thanksgiving, Plimoth Plantation, comprised of a recreated 17th-century English village and a Wampanoag Native American homesite, was bustling with activity – activity that catered to all senses.

In the English settlement, my family walked into a house and could feel the warmth of the fire, tended by a young woman carving slivers of wood. We listened to the young woman describe where she sleeps (a mattress on the floor) and how the slivers of wood she sliced keep her small cooking fire heated to the correct temperature.

Walking around outside, the livestock smell wafted from pens behind the houses. But those acrid flavors were soon overwhelmed by ones much more appetizing.

Inside one house, three women in era garb were roasting sausages and talking about how plentiful the hunting was in the region. The meaty, smoky pungency hit the nose immediately upon entering the house.
Over in the Native American village, the immediate attraction was the man roasting a whole turkey over an open fire. He had caught bird that morning and spiced it with wild onion and garlic, herbs he picked on site. The turkey was nothing you’ve ever seen on your Thanksgiving table. He had it skewered with a hefty branch, rotating it every once in a while to form a crackled, golden skin. Each herb hit the nose in tandem with that comforting smell of roasted meat. The gathered crowd collectively drooled each time a bit of turkey fat dripped from the thigh onto the hot coals and sizzled.
And then we all moaned when the man explained that the state of Massachusetts had not granted them a license to serve food – so he and his fellow workers would be enjoying this meal themselves later. Unlike in the English settlement, the people working in the Wampanoag homesite do not role play in character, but rather engage visitors with information and stories about the lives their ancestors lived in the 1600s. 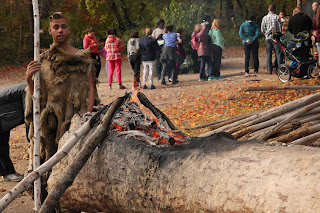 Next to the roasting turkey was another burning fire, but this one blistered atop a massive tree trunk, lying horizontal on top of blocks. The man tending the slow burn explained that they were burning out the log to make a canoe, and would be doing so straight through the next few days. Burning it out would take time but the process was traditional and also allowed for the sap to work its way outwards in the wood, naturally water-sealing the soon-to-be boat.
While the roasting turkey was off-limits, Plimoth Plantation still had options for guests to taste their way through the 17th Century. Up at the Craft Center, artisans show visitors how to make candles or bake bread in the traditional style. That bread is on sale later in the day. And the site even offers special ticketed dinner functions in the coming months, like a harvest meal with the Pilgrims, holiday events and a special Thanksgiving dinner.
While my family’s Thanksgiving meal certainly did not include a fire-roasted turkey caught in our own backyard, I’ll still be thinking about the smells, tastes and sounds we experienced at the home of the original Thanksgiving. And whenever I lift a big turkey leg to my mouth while my family chats around the dinner table, I’ll be thankful I’m not lifting a pike while my commander yells for me to advance on the enemy. 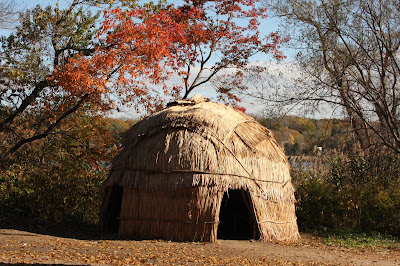