(this post was written after a conversation about Ernest Hemingway, the best drinks around the globe and my grandfather, an avid traveler in his day) 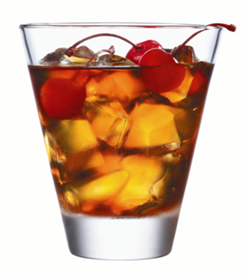 The soul of any fine quality spirit lingers in the drinker’s initial reaction. With bourbon, that moment the bottle opens and the vapors meet the world for the first time since being locked away in an aged wood barrel, should take you somewhere. For just an instant, you’re transported to a porch in Tennessee one hundred years ago, rocking to the hum of crickets serenading a setting sun.

Or perhaps your mind conjures something more personal; an image of an old man in a high-back chair, his face stone and stoic, his body lean and strong but aged like those wood barrels. His slender fingers curled precariously around a crystal glass that sweats condensation with the sip he takes to end every sentence – a tangible exclamation point signifying his story’s familial, historical or simply nostalgic importance.

And then the vision is gone and you’re staring at a lowball glass on the bar top in front of you, fogging from the ice cubes wedged together in its shallow center.

You smell the whiskey again, letting the aromas tickle your nose hairs to the brink of burning, and you pour yourself a gentleman’s portion. In a roughly three to one ratio, you slowly add vermouth to the whiskey. The bourbon shouldn’t lose any body or color and once you slip the bitters in, watch the droplets disappear into the deep chestnut concoction. Notice the two or three ice cubes dislodge from the bottom of your whiskey glass and breach the surface, bobbing like frantic buoys in a restless brine. You were sure to use no more than three cubes, or else the drink would be watered down. Anything less than two cubes simply and indefinitely solidifies your manhood and stamps your ticket into the Hemingway-Wayne-Sinatra-Eastwood Steal Balls Hall of Fame. You do have a jar of maraschino cherries unopened in the refrigerator. Tradition calls for the garnish but you aren’t sure.

Besides, your grandfather said the cherries are unnecessary and he’s waiting for his drink.

The Manhattan, he once told you is the drinking man’s drink; the king of cocktails, some say.

You’ve learned from your Papa, and the Rat Pack, that the drink is straightforward and strong, yet refined with an air of old school bravado, reminiscent of a time when bravado was real and respected among men.

Those same men are the drink’s patrons and have been so since the days when their now crackled whiskey faces were baby-soft and devoid of the wrinkles and the scars etched into place by war, children and change. Before they sat brooding on a dank sailor’s barstool in Key West or peacocked in a smoky London pool hall.

Like the men who enjoy it, the Manhattan hides an intellectual complexity and a quiet honor among its simple ingredients.

You’ve mixed the ingredients so you give the glass a little shake and notice the liquid remain a steady color and muffle the clink of the cubes.

The shake releases more vapors and you think of your Papa who is at that moment sitting upstairs in a high-back chair, waiting patiently for the one thing he has ever asked of you. You know he won’t complain if it’s made incorrectly, he never has before.

He’d get up to make it himself if his knee wasn’t acting up again. Or if he felt he could leave his wife’s side. Other than you from whom he ordered his drink, she is the one person among the dozens of frolicking holiday partygoers that has his full attention. You know he’d probably rather be sitting on the couch watching the football game with his grandchildren or in the basement playfully knocking down their egos with every billiard ball he knocked in. But he would never let his wife sit alone in a room full of people, not without him there to point out the children she can’t see very well anymore or to retrieve her the hors d’oeuvres she has a hard time getting up for. No he wouldn’t leave her side, he never has before.

And so you check to make sure you’ve made his drink as perfectly as you could. He deserves the perfect drink. You used the best whiskey. You think you put in just the right amount of vermouth. You made sure to include a manly number of ice cubes.

You wonder if you should taste it but then you realize it would do no good. You’ve never been able to finish a glass of the stuff.

You tried once, with your cousins. One night you all went to a nice restaurant, just the grandchildren. On a whim your oldest cousin decided to try Papa’s drink. Why not? It must be good; he drinks them all the time. Amidst pleas to the contrary from your significant others, you, your two oldest cousins and one younger ordered up four Manhattans – an homage to the man who over the years silently taught you the meaning of honor and family.

You all raised your glasses, toasted to the old man. With an urbane sense of accomplishment, you drank. It was like a scene from a liquid lunch in the boardroom of a 1950s advertising firm. Except for the reaction.

The squints. The puckers. The burning. The whiskey face deflowering. That was unexpected.

You all put your glasses down. Not a word, just a few twitches. A simultaneous thought strung from one cousin to the next: how does Papa drink this?

You summoned your inner Captain Tony and coupled with every ounce of machismo and a desire to avoid family ridicule, you dove back in.

The drink wasn’t as cruel the second time around. The whiskey was overpowering, with a sweet molasses backdrop and an almost smoky alcohol finish. The vermouth and bitters were foreign to you, adding a bite that you just couldn’t place on the flavor spectrum.

By the third sip your mouth had numbed to it or perhaps the ice had melted just enough to somewhat nullify the harsh impact. You thought the cherry garnish would be a welcome respite but then it popped in your mouth and released a shot of pure, soaked-in bourbon.

Your wife at the table found your face comical. You had maybe one more sip until you noticed your cousins slide their own unfinished glasses away. You conceded as well. The Manhattan won round one and in one night you learn that it takes a strong man to indulge a strong drink. Only after years of drinks, years of experience, years of happiness and pain, success and failure, love and death, will you be ready you for an unflinching moment of peace with lady bourbon.

Papa has been enjoying those moments for a long time. The ancient bottles of booze behind his basement bar can back that up. He explained them all to you once when you were younger: the bourbon, the anisette, the Frangelico, the imported limoncello, the unlabeled bottle he took back from Europe; the heavy glass tumblers and crystal scotch bottles up on the high shelf you couldn’t reach.

Many of them are very old, maybe dating back to his time in the war that he’s never been able to talk about. You’ve only heard bits and pieces from his days as a medic in the European theater, the horrors of D-Day and what he saw too gruesome for a modern day twenty-something to hear. Undoubtedly some bottles are from Florida, gifts perhaps from long passed friends or neighbors from their winter home in Hallandale. He hasn’t been down there in recent memory, the trip too cumbersome and the doctors too far away.
A few might be leftover from the exotic trips he took with his wife to South America and across the Atlantic. Is that where you get your sense of adventure?

They are all souvenirs turned heirlooms, each mostly empty but filled with memories, friends and places known to you only through his stories.

You are back to the task at hand, still questioning whether or not you made the drink correctly. You refrain from tasting the Manhattan before bringing it upstairs to Papa. You decide it’s ready. You’re gambling on your abilities and the expert’s benevolence.

You weave your way through the crowd, focusing on keeping every drop in the glass. Papa sees you and nods. You approach the patriarch’s high-backed chair offering him the king of cocktails.

He wraps his fingers around the glass. Before he looks at you, he stares momentarily down into the chestnut liquid. There are years of emotion in an instant. You imagine the silent picture moving behind his eyes: serving his country, the birth of his children, that beach in Mexico, those mountains in Italy, the love for his wife.

“Thank you,” he says before tasting it. You hesitate, questioning your decision to not include the cherries.

Then he takes a sip and looks back at you. In his eyes there is no regret, no anger, no scorn – there never has been. There is power. There is pride. There is love.

“Good job,” he says, and takes a sip to punctuate the sentence.

He and the drink are one in the same: stoic, strong and timeless. They are remnants of another time; a time founded in honor and undisputed duty. A time universally revered and yet, in many ways, wholly unattainable ever again. He takes another sip and you hope that one day, like Papa, you can savor the taste without flinching.

As he swirls it in his hand, you realize the Manhattan is your favorite drink; and that you’ve never even finished a glass.