I can't imagine mistletoe holds much lure, other than lore and legend anymore. A friendly peck on the cheek entering a holiday party, perhaps, but the days of getting caught under the infamous foliage has seemingly gone the way of Ebenezer Scrooge's frugality. But that does not mean spontaneous romance is dead, my friends. It exists not in a weed nailed to a doorjam, but rather in warm summer nights and brisk mountain breezes, fireworks and sunsets, dive pubs and tiki bars. Call me a hopeless romantic and I'll point to the secret and not so secret spots around the globe that make it a habit of igniting sparks. After all, during the holidays don't we all just want a little warmth?

Nobody ever said cowbells are sexy. But echo them across a jade valley while a young couple rests from their hike on a grassy hillside, and you’ve created yourself the stuff of fairy tales. There’s something very Sound of Music about lounging in the grasses of the Alps’ foothills. Whether you’re twirling or not, the scenery immediately removes you from reality and all at once romance and anything else you can dream up is a very real possibility.

After experiencing the Top of Europe (the Jungfrau), not much else can compare to the exhilaration. But hiking back down through the Lauterbrunen Valley, with stops in some of the hillside villages picking up lunch supplies from local vendors, is a close second.

Our honeymoon to that point had been filled with adventure. We sat on a random patch of grass, fumbled through our backpacks for some chocolate and cheese and leaned back to the contour of the land. A train chugged by below, hauling another group of wide-eyed travelers up to the frozen peak. For us, though, the sun settled in next to a warm breeze and all at once the peace of nature ensnared us. For so many moments, the only sound was the cowbells clanging on the opposite side of the valley. My wife held my hand for more minutes than I can remember then kissed my cheek and pulled me to my feet. The hike wasn’t nearly close to being finished. There was a lot of valley left to descend. It is the Alps. And anywhere you stop is going to give you an unforgettable moment.


If Shakespeare says it’s romantic, it’s romantic. As someone who spent a lot of money and a lot of time delving into the finer points of Billy’s life works, I can tell you that this particular play ranks dead last on my list of favorites. But there’s something to the locale, a tourist-crowded alley spilling into a tight courtyard, that makes this spot worth a peak and a peck.
The walls leading into the courtyard are carved and covered with love notes, mostly to the eponymous maiden, immediately bringing out the romantic in even the sternest fellow. In the far corner a statue of Juliet stares demurely at the passers by, the majority of them copping a feel of her breast (good luck, they say – I say some perverted statue maker needed a good excuse). The petite thing rests underneath the famous balcony and should you so desire, and although I would urge against it many a sock-in-sandal tourist would not, you can recite a few poorly remembered lines up to the stone outcrop.
But it’s not until you actually climb through the home and get to the balcony that the scene becomes more surreal. We were in Verona off-season (mid-September) and the crowd thinned hastily. We were left alone on the famous balcony, a few stragglers below pacing unhurried over the cobblestones. Some famous lines of the Bard floated on an easy breeze, stealing away the tourist-trap tenor and leaving behind a still moment of not love but rather blind devotion – the ability to see in something, someone what no other sees and to cherish it. It seems like a highly Shakespearean ideal, and one Juliet’s balcony will gladly oblige.


3. Cinque Terre, Italy – from your balcony looking onto the ocean

Italy’s five lands have had a rough go of it these past few months. Floods and mudslides devastated these quaint seaside villages, leaving dirt and debris piled waist high in the typically uncluttered piazzas. But the villages built for pirate refuge will be rebuilt and emerge more vibrant and resilient than ever. Its people have an immense affection for the towns and when visiting, you’re instantly immersed in emotions you’ve very rarely felt. The sun glows out over the sea like one of the freakishly large lemons swaying in a nearby garden. And the stars at night are outnumbered only by the infinite anchovies schooling away from the midnight fishermen. If only they could cast their nets to the sky.

If you’re lucky enough to be in Cinque Terre, you’re lucky enough. Period. So climb to your balcony – your room, which is probably an apartment-style abode up innumerable stairs – will have one. Step out and breath in; hold onto the railing or the clothesline or someone’s hand and peer out across the terraced green hillside and the terraced rainbow of homes that stagger down to the harbor.

Somewhere on this list I had to give some love to the biggest little lover’s town in the Northeast. Boston may be known for its history and rabid sports scene, but those minutemen (revolutionary and sideline at Gillette Stadium) go home to someone. Family and affection abound from Causeway to the Common, which is where you’ll find Frog Pond and little slice of winter heaven. This dreary season aside, when Boston Common is sunk in a sea of white powder, the skating rink at Frog Pond shimmers like a frozen oasis. Underneath glittering lights strung through the trees glide couples old and young, coordinated and not, while children weave in and out of their legs like the yarn in a mitten. If you take the time to absorb the atmosphere, you’ll forget about the New England chill. With someone special in tow, Boston in wintertime will provide plenty of ways to stay warm.

Key West has long been a destination of creativity and romance. The island is peppered with hotspots and hideaways and won our hearts on our first visit. We had climbed the lighthouse for the panoramic view and we loved walking the pier at sunset. To pop the question, I combined them both.

The Key West Historical Society, proprietor of the Key West Lighthouse, was more than happy to oblige my request to reserve the lighthouse at sunset during trip. Only four marriage proposals had ever been done at the lighthouse – none at sunset. All four had said yes. So I was going to be the first at something - either the first to propose during after hours during one of those legendary crimson Key sunsets, or the first to get shot down.

The Society helped me set the secret plan in motion: Bob the lighthouse keeper would be sweeping in the driveway fifteen minutes before sunset. We set up a secret code word so he’d know it was me when Danielle and I approached. With everything in place, seemingly fool proof, I got nervous. Danielle and I had never had the best of luck when it came to significant relationship events. On our first date, the power went out. On our first vacation together, the theme park rides broke down. The beautiful disaster that was our relationship became somewhat of an inside joke. For this particular trip, we set up our vacation with my cousin and his girlfriend – Key West for a few days and then a drive up to Disney World. It seemed perfect. Danielle was totally unaware.

The disaster almost came at the airport. My cousin was carrying the ring for me. He was pulled aside by TSA, who started rifling through his bag. Turns out the dope had packed a too-large bottle of Scope. He never came across the ring - safe.

I planned to propose the day we arrived. But as we arrived, so too did Tropical Storm Fay. The forecast was for near-hurricane conditions. The weathermen didn’t have a precise time for when the storm would hit the Keys – they just knew it would, and it would be powerful. I was resolved to follow through with my perfect proposal. And Tropical Storm Fay was kind. The day was gorgeous – sunny and warm. That evening we walked past the lighthouse. Bob was waiting, sweeping. He told us the lighthouse was closed but he’d let us take a walk up while he finished cleaning. At the top of the lighthouse, as the whole island sunk into a deep red sunset, I knelt and asked her to marry me.

At 6am the next morning we fled the Keys, Fay biting at our heels. And I was the first person to propose after hours atop the Lighthouse during one of those legendary crimson Key West sunsets. 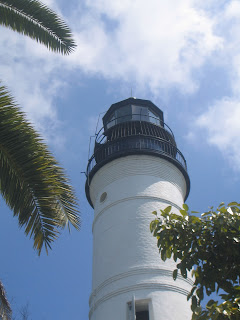