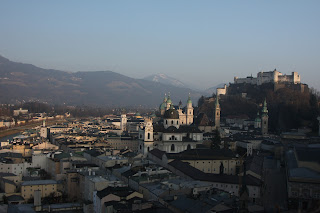 From any angle, the Austrian city of offers breathtaking views. Looking down from high up on the Hohensalzburg fortress, tiled house peaks cower beneath a seemingly endless array of mammoth church spires, while the Salzach (river) skirts around the Old Town like Julie Andrews in a meadow.

Standing at riverside, the Hohensalzburg hilltop battlement looms over the spires like an armed shepherd over his flock. Flanked by steep cliff faces and an outlook plateau, the gleaming white, sprawling military castle is imposing even in the 21st century. Even the pedestrian-friendly streets are picturesque; each shop – from Tommy Hilfiger to McDonalds – has an iron sign hanging above the door, decorated with the symbol of their wares, a tradition that goes back centuries. With Easter approaching, many of the shops are strung with beautifully decorated eggs. 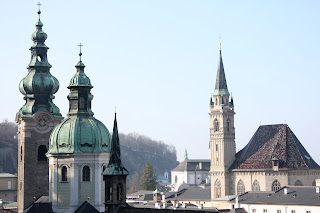 Climbing along the ridge between the stronghold and the , you can wrap behind the Honesalzburg for a backside view and a stroll past old watchtowers and ramparts. At the the entire city, from river to steeple to fortress, opens up in a sparkling panorama, complete with a white-capped mountain backdrop.


The city unfolds like a perfectly constructed opus, pristine beauty at riverside, across the rising, elegant churchtops to the powerful climactic hilltop fortress and the majesty of the surrounding alpine range. If you listen you can probably hear some of the music that made this corner of so popular; although it may just be Sound of Music songs cycling through your head (but if you’re luckier, it’s a music student pounding out a Mozart classic in a nearby open window). 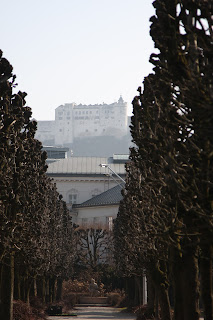 ’s views are outstanding, but the best perspective might require a trip outside the city walls.


A short bus ride (#840 from Mirabelleplatz, Mozartplatz or the train station) takes you out of completely, right across the border into and the mountain town of .


The town offers little more in the way of sightseeing than its Nazi-era train station, built large and imposing for Hitler to utilize during his retreats to the region. But from the train station / bus terminal, the options are many.


One bus will bring you to the Saltzburg salt mines and an underground tour of the product that put that eponymous city on the map. Another sweeps you up into the mountains to the , a museum housing World War II and Nazi exhibits. This former Nazi stronghold was bombed into oblivion by British forces but reconstructed over the spiderweb of underground bunkers. From the Center, in-season, you can head up above to the Eagle’s Nest, Hitler’s mountain retreat that looks down over like a megalomaniac on a rocky throne. The building has since become a restaurant. 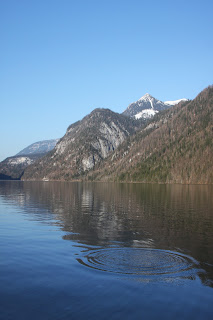 But the most peaceful of the choices is the quick 10-minute bus to Konigsee (King’s ). A tiny lakeside village, Konigsee is pristine by nature and on purpose – the only watercraft allowed on the lake are the electric motor shuttle boats that loop the water in silence. They bring tourists and hikers out to the famed St. Bartolomae, a red onion domed chapel tucked into a glacial groove halfway out on the lake. Its setting is fairytale to the core. Even the boat ride to St. Bartolomae comes complete with whimsy: the captain stops midway, cuts the engine and pulls out a trumpet. Standing at the edge of the vessel, he rattles off a Bavarian tune, pausing in between lines to hear the crystal clear echo bouncing off of the surrounding sheer cliff faces. 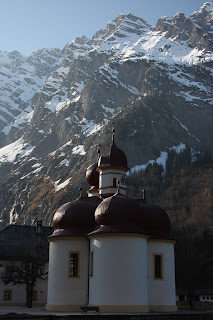 From one end of the lake, the mirror-like water stretches out and then disappears behind beautiful outcrops. On the water, you see St. Bartolomae’s red dome’s contrast in front of soaring white mountains. Standing at the chapel and its nearby fishing hut, you scan back over the lake, the only disturbance the infrequent ripple from a fish. In the distance, the Eagle’s Nest can be seen propped high on its perch amidst ivory peaks. Natural and man-made beauty in every direction.


Konigsee offers a peaceful afternoon for those seeking to complete their experience. It borders on more Bavarian, but its charm is similar to . The Bavarian mentality pervades both places – relaxed, hospitable and jolly. It’s a perspective that is easy to indulge in. And no matter where you end up, it seems you’re always in line for a great view. 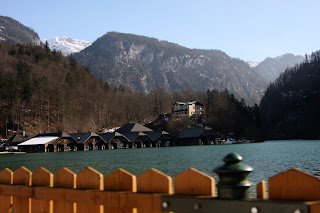